Listen To Her, says Nandita Das in short film on domestic abuse during lockdown


The film reveals the first step of standing up against domestic violence is to lend an ear to the victim and stand in solidarity.

Nandita Das’s short film, Listen To Her, addresses the rising instances of domestic violence during the lockdown. The film explores the narrative of exploitation cutting across class, with patriarchy making its presence felt on different levels. With two different sets of narratives, Das has been able to articulate the current scenario, in which women are doubly victimised, without having the opportunity to seek shelter due to the lockdown.

In the film, Das plays a working woman, married with a young son. Following the lockdown guidelines, she can be seen working from home through video conferencing. Though she clearly seems to be managing the job of a homemaker all alone, her priorities are not quite realised by her husband.

Hence, her work gets continuously interrupted, as she is constantly at the beck and call of her husband. He does not even bother to lower the volume of his voice so as to avoid disturbing her at work, or share the responsibility of their child. The bored kid too, knows that he cannot go to his father for recreation and asks for his mother’s company.

Das’s character seems to be in a relatively pleasant mood in the beginning. However, her frustration begins to grow as she is simply not allowed to concentrate on her work. In the midst of all this, she receives a call from a stranger, a woman, with a voice shivering in fear. She is unable to ignore the call the second time or the desperation in the stranger's voice. 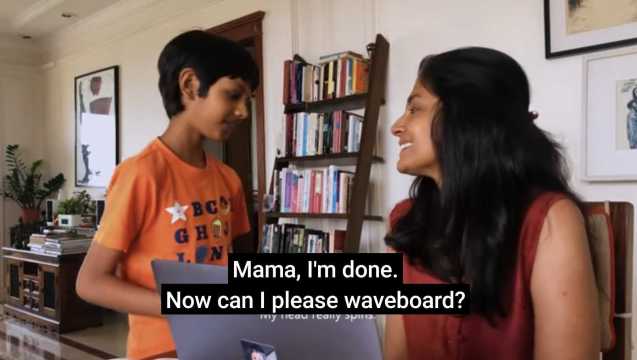 From this point onwards, the second narrative takes place, lending more layers to the objective of the film. It shows how patriarchy functions, both under the cover in a so-called sophisticated household, and baring its naked and cruel claws in a family where survival is the biggest struggle. Education may stop a man from raising his hands on a woman, but the abuse comes out in the tendency to psychologically supress the 'second sex'.

The woman on the call meets her fate at the hands of her enraged husband. Though the lockdown is mostly established through the ambience in Das’s household, it becomes clear that the victim has no means of seeking shelter and so she does not disconnect her call in the hope of having someone share her ordeal.

Das's character, though agitated and scared, desperately makes an attempt to save the woman, perhaps in vain. But in the end, she finally prioritises and decides not to follow her husband's order. Instead she pays attention to the aching voice of the victim on the call.

The film shows that a collective effort from women, who can raise their voice in the most dire of situations can perhaps shake the foundation of patriarchy. Listen to Her reveals the first step of standing up against domestic violence, that is, lending an ear to the victim and stand in solidarity.

The film is undoubtedly shot inside the household, yet it doesn’t show a lack of professionalism at any point, especially in the cinematography. The film is made with a clear, sorted vision that conveys volumes in a short span, backed by a striking performance by Das herself.

Watch the film below.