Prithviraj back in Kochi with 58-member Aadujeevitham team; all head to quarantine centre


The actor and the film crew were shooting at the Wadi Rum desert in the West Asian country when the world went into lockdown due to the COVID-19 pandemic.

Actor Prithviraj Sukumaran, along with 58 crew members of the upcoming Malayalam film, Aadujeevitham (2020), landed in Kochi on Friday morning after being stranded in Jordan for over two months.

In a video released by Ernakulum district administration, Prithviraj and the crew members of the film are seen coming out of Cochin International Airport. According to a report by the digital news platform, The News Minute, the actor was seen driving off in a car that had been parked in the airport premises. 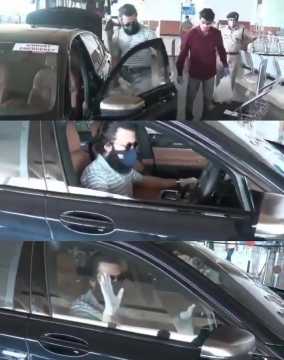 The report further added that the crew members, as per government mandate, will now have to undergo a seven-day state institutional quarantine at the government facilities or paid quarantine facilities in hotels, before they are cleared to go back to their lives.

As part of the Centre’s Vande Bharat phase two mission, “A total of 187 passengers were on the flight that was heading to both Delhi and Kochi on the special Air India Flight AI 1902,” the Indian Embassy in Jordan posted on Facebook.

F-211/2020 At the service of the countrymen. As part of Vande Bharat phase II, Embassy of India today organized...

In March, Prithviraj had shared how the team was stranded while shooting the second schedule of the film due to the ongoing coronavirus pandemic. He said the team decided to stay back and complete the schedule by taking all precautionary measures.

“We are currently in Wadi Rum, Jordan and continuing shoot. We have decided so because, given the circumstances, that seems to be our best option. There are no international flights operating in and out of Jordan at the moment, and given the fact that all of us are already here, we can either stay put in our camp in the desert which is currently accommodating only our unit, or get out and shoot at our location which is barely a few minutes outside our camp. After consulting with the authorities and undergoing medical check-ups for each member of the unit, we have been given a go-ahead for the shoot as the location and the process of filming Aadujeevitham is in itself very isolated,” he had posted.

Aadujeevitham, based on the critically-acclaimed eponymous 2008 novel about an abused migrant worker in Saudi Arabia, is one of the most anticipated films of this year. Having been announced with Prithviraj in the titular role of Najeeb Muhammad, the film directed by Blessy, also features Amala Paul.