It was challenging to unlearn my view of the American life for The Illegal, says Suraj Sharma


The actor recalls his experience of shooting for a film with an unusual subject and shares memories of the late Irrfan Khan, his co-star in Ang Lee's Life Of Pi (2012).

International actor Suraj Sharma is right now in the United States where the COVID-19 situation is disastrous, to say the least. So, like most other sensible people, he is staying strictly indoors. But the Life Of Pi (2012) actor says he is spending his time positively and trying to make the most of the situation.

Much before the COVID-19 pandemic struck, Suraj Sharma had shot for an emotionally moving film called The Illegal, directed by Danish Renzu. The film is about a budding Indian filmmaker, played by Sharma, who visits the US to learn the craft and what he experiences when he is compelled to live all alone far from home. The film also stars Adil Hussain, Neelima Azim, Shweta Tripathi and Iqbal Theba.

In an e-mail conversation, Sharma patiently answered some questions from Cinestaan relating to The Illegal and his experience of shooting for a film with an unusual subject. He also recalled fondly the late Irrfan Khan, his co-star in Life Of Pi. Excerpts:

We are aware that the situation there is terrible. Hope you are safe. How are you doing in such an atmosphere?

Thank you for asking. Yes, the situation is rather bad and quite confusing, but I’m trying to make the best of it. Mostly escaped New York City and have been camping out west and living the cabin life. It’s been nice, actually. Learning how to cook, working on making beats and writing, and working on my acting craft and trying to learn and realize what I’ve been doing in the past few years.

Any message for people who are under lockdown because of this pandemic?

As much as the situation is sad, and terrifying, it’s also a duration when you have time at hand. I believe most things in life abide by the idea of duality of good and bad. The bad is obvious, the good is yours for the making. Use the time to look inwards, heal or expand relationships, work on skills and hobbies you let go of or always wanted to pursue. Spend time with family. This is the time for it. Take advantage of this blessing in disguise. If anything the quarantine and the fear outside has taught me that life needs to be appreciated and made use of. Good luck! 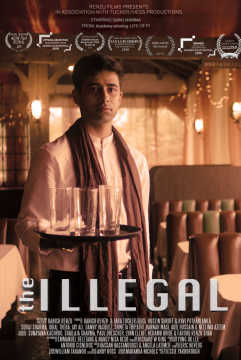 How was the experience of shooting for The Illegal?

Shooting The Illegal was an absolute blast! Working with a collaborative director like Danish, who imbues everything with such depth, was a much cherished experience. A labour of love with a small but incredible crew in locations in Los Angeles that most don’t shoot in. It was a wonderful experience that taught me a lot, not only about filmmaking, but [also] about how to step into the shoes of another and try and understand their perspectives on life.

What challenges did you encounter while playing an NRI who is forced to work in a restaurant to make ends meet?

Being an outsider in America myself (and also an aspiring filmmaker), I saw a lot I could pull from to make my experience coincide with Hassan’s. Most challenges came from unlearning my view of American life and learning Hassan’s by talking to migrant restaurant workers whom I had already built relations with in the past couple of years.

The other challenge was the time constraints we were working under, making the most of the little time we had. Antonio [Cisneros], the DoP [director of photography], and I had a conversation recently where we began to realize that the same constraints we thought were holding us back might have helped our creativity and made us do things we wouldn’t otherwise! Overall, the shoot was fun, rejuvenating, and always honest to itself. I think it helped the story.

How was it working with Danish Renzu for the first time?

Danish is a wonderful man and a deep and sensitive director. His stories are always soulful and full of empathy. His past, his thoughts and his perspectives always leave you with something you didn’t think of. Everyday on set he was tremendously collaborative and wanted the story to bring itself as close to reality as it could. I had a fantastic time and look forward to what he does next!

How did you prepare for this role? Is your preparation different for each film?

Preparation is always different. For Hassan I reconvened with friends from the past in New Delhi, interviewed or talked to restaurant workers from India in New York, and worked on the script and character building with Danish. Because of the instinctual nature of our shoot, a lot of the building happened during the shoot, too. I worked to understand the DOP's lighting systems and lens choice, and combined it with our prep. Danish and I would have conversations to help create Hassan as a dreamer faced with a harsh reality.

There is sweet bonding between your character and Babaji, played by Iqbal Theba. How was it interacting with him off the set?

Iqbal is an amazing, honest treasure trove of stories and experience who overflows with kindness and youth. His presence in this shoot was truly a gift, not only to the story and the characters, but to the entire crew. He kept our spirits up, regaled us with tales of his amazing past, and obviously killed it with his skill when we were rolling. Iqbal Theba is a special man.

What are generally your criteria before agreeing to act in a film?

The script and the people I would be working with. To me that’s what matters the most. Mutual understanding, communication, trust and honesty. It’s a relationship, after all. Together, the script and all the people who work with it are trying to create something, and you must be on the same page.

You have worked in different industries like Hindi cinema, Hollywood, independent cinema and also American TV. How has your personal experience been as an actor in all these years?

It has been quite the journey. The people I have been blessed with and the stories I have gotten to be a part of and the places I have been is something I can’t be grateful enough for. A long way to go still!

You worked alongside Irrfan Khan in your first film, Life Of Pi (2012), although you didn’t share the screen with him. How was it playing the younger version of Irrfan Khan, that too in your first feature film?

Life Of Pi was magical. Every little bit of it has been a dream and set me on a journey. Getting to spend time with Irrfan was truly special. Such a humble, curious, intelligent and funny man. He inspired me and spurred me to go do something with this acting thing.

He also warned me about everything that comes with it. He was a good man and it’s truly sad that the world has lost him. He will live on through his work, his words and the fire of inspiration he has set in many of us.

What are your forthcoming projects?

There a few things in the pipeline. I’m trying to write a script or two as well, but I’m also exploring music. We shall see. During the pandemic I wish to grow and learn more and be in a better, more holistic place when the industry kicks up again.