As the legendary 'Lalettan' turns 60 today, a look at the 1980s which defined the genial star who captured the hearts of Malayali film lovers with sincere, spellbinding and spectacular performances.

In a prolific career spanning 40 years, Mohanlal was at his best between 1985 and 1990, six years in which he demonstrated his astounding versatility as an actor and firmly established himself as a star. Born on 21 May 1960, Mohanlal celebrates his 60th birthday today.

Mohanlal’s rise in Malayalam cinema was like his distinctive gait — slow, sedate, steady. While he made his debut in 1978 in Thiranottam, a film made by friends which was only released 25 years later, his first film to hit the big screen was Manjil Virinja Pookal (1980), in which he played a negative role.

The early 1980s were anything but remarkable for Mohanlal, considering the fame he was to go on to achieve. Until 1983, he was just trying to get a foothold in the industry by doing bit parts, playing villain or second fiddle — Paul in Thakilu Kottampuram (1981), Sankarankutty in Dhruvasangamam (1981), or  Vinu, bosom buddy of Prashant (Shankar), in Ente Mohangal Poovaninju (1982). There were some notable performances, too, that hinted at the promise he held as an actor, like the righteous Kannan in the multi-starrer Padayottam (1982) or the idealist Ravi amid opportunistic politicians in IV Sasi's Iniyenkilum (1983).

With each movie, Mohanlal made his presence felt more and more emphatically. He also made it count, as he shifted gradually to doing more meaty, even leading roles. More importantly, he was finding greater acceptance with his on-screen mannerisms and portrayals. His artistic traits — that walk with the drooping shoulder, that hesitant, nervous grin and smile, a dialogue delivery that seemed measured and thoughtful — would go on to become trademarks.

From 1984 to 1985, Mohanlal reinforced his status as an emerging star. He dabbled in a variety of genres — thriller (Uyarangalil (1984), as an anti-hero), comedy (Poochakkoru Mookkuthi (1984), Kalaiyil Alpam Karyam (1984)), drama (Appunni, 1984) and action (Athirathram, 1984). Although most of his films were multi-starrers, Mohanlal never got lost in the crowd. It was clear that acting came easily to him.

This period also marked the beginning of his creative partnership with directors Sathyan Anthikad and Priyadarshan that was to catapult him to the status of bankable star. In the 1980s, Anthikad had earned a name for himself as a masterful director of family dramas that captured the struggle of the Kerala middle class. In Mohanlal, he found the ideal actor to infuse both the necessary gravitas and the realism to characters that Malayalis could relate to. 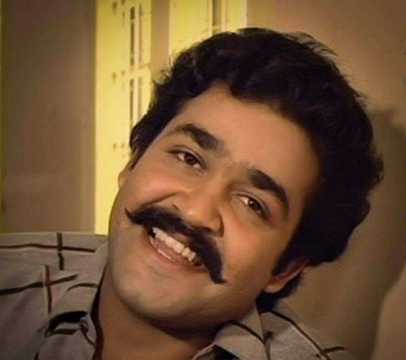 Mohanlal got his first taste of real stardom in 1986, when Rajavinte Makan became a major hit. The movie, the story of gangster Vincent Gomes's battle with an unyielding, scheming politician, is considered one of the best action thrillers in Malayalam cinema. Incidentally, the script was written with Mohanlal's great rival Mammootty in mind.

The five years from 1986 to 1990 were the most productive for Mohanlal for the fame and glory he achieved. He revelled in a myriad of roles and in the diversity of scripts, most of them written by Sreenivasan, that held a mirror to the struggles of the common man amid the societal and economic upheaval in Kerala, where unemployment was on the rise, forcing people to make a beeline for jobs in the Gulf, the joint family system was crumbling, and the vestiges of feudal society were falling by the wayside.

In 1986, the Anthikad-Mohanlal-Sreenivasan combo was on a roll, giving us the cult classic comedy dramas Sanmanassullavarkku Samadhanam, TP Balagopalan MA and Gandhinagar 2nd Street. They had a common thread — a protagonist trying to save himself and his family from economic suffering brought about by various reasons and compounded by joblessness.

In Sanmanassullavarkku..., Gopalakrishna Panikkar, saddled with debt incurred for marrying off his sisters, is desperately trying to get a recalcitrant tenant to vacate his house so that he can sell it. In TP Balagopalan MA, Mohanlal played an educated young man (an MA, as the title describes him) struggling to sustain his family in a town without a steady job due to the trade unionism that was prevalent in Kerala. In the end, he is forced to return to his native land.

In Gandhinagar 2nd Street (1986), Mohanlal, as the unemployed Sethu, pretends to be a Gurkha, "Bheem Singh ka beta Ram Singh", at the suggestion of his friend Madhavan to guard a residential colony hit by a series of thefts. The film was as much a commentary on Kerala’s dependence on the Gulf for employment as it was on the class-obsessed societal makeup of the state.

The fluidity and nuance with which Mohanlal showcased the vulnerabilities, helplessness and uneasiness of a person weighed down by responsibilities, faced with uncertainties and caught in moral dilemmas in the three movies is a masterclass in acting through body language. They also gave ample proof of his impeccable comic timing.

The National award-winner Doore Doore Oru Koodu Koottam (1986), written by Sreenivasan and directed by Sibi Malayil, follows in the same vein. Diwakaran is an SSC-pass unemployed youth who gets a teacher’s job, with the help of a fake certificate, only to face unpleasant consequences.

These movies resulted in a huge fan following for Mohanlal among the youth, who felt his roles echoed their plight. In between such comedy satires, Mohanlal found success with romantic drama, too. In Padmarajan’s 1986 masterpiece Namukku Parkkan Munthirithoppukal, he played Solomon, who questions and puts to test the traditional ideas of love and marriage. Mohanlal made the transformation of a happy-go-lucky, nomadic Nasrani into a love-struck neighbour seem natural and believable, dealing with it delicately and without being overbearing, leaving the audience with a sweet pain that lingers to this day.

The year 1986 was a particularly busy one for Mohanlal, as he did over 30 — yes, over 30! — films. Of course, in those days most of the films were shot in Kerala itself on small budgets in double-quick time, with the artistes moving from set to neighbouring set. His big commercial success of the year was Priyadarshan’s Thalavattam, later remade in Hindi as Kyon Ki... (2005).

Mohanlal had a rollicking ride in 1987. Action-thriller Irupatham Noottandu's Sagar alias Jacky, romantic drama Thoovanathumbikal’s Mannarthodi Jayakrishnan and comic caper Nadodikattu’s Ramadas have all been immortalized. Three different types of films and Mohanlal was equally comfortable with their demands — as an action hero, as a romantic bachelor, and as an unemployed youth at his wits' end, willing to do anything to make a living, even risking his life to reach 'Dubai’.

Nadodikattu is among the movies most watched by Malayalis even today. Its sequels, Pattanapravesham (1988) and Akkare, Akkare, Akkare (1990), continued with the exploits of 'CIDs' Dasan and Vijayan and were also mega-hits.

Mohanlal continued to achieve success in 1988 by straddling genres with movies such as Moonam Mura, Chithram and Aryan. But probably his outstanding performance of the year was in Ulsavapittenu (1988) as the naive, innocent Aniyankuttan of a Namboodiri tharavadu (traditional household) that is in wane due to the extravagant lifestyle of his elder brother and patriarch. Mohanlal’s portrayal of Aniyankuttan’s anguish at not being able to prevent his brother’s wayward ways is gut-wrenching. The climax leaves you disturbed.

Kireedam (1989) was arguably Mohanlal’s crowning glory in his first decade in Malayalam cinema. He handled with elan the role of Sethumadhavan, a young man of great promise who sees his dream of becoming a police officer falling to pieces after he tries to save his father, a police constable, from a local gangster. The repercussions draw him deep into a mire from which he is unable to escape.

The greatest achievement of the heart-rending tale of an adoring son and a loving father’s dreams going sour is the way both Mohanlal and Thilakan (the father) make you feel the pain of shattered aspirations and the hopelessness it engenders in their rawest form. Sethumadhavan’s varied emotions as he is transformed from a man fearing losing everything he has yearned for to a knife-wielding criminal who realizes he has nothing more to lose and then the short, sharp yelps of a son who feels that he has failed his father, all stay with you long after the movie.

The period (1980–1990) that many consider the golden age of Malayalam cinema was, perhaps, fortunate to have had a performer like Mohanlal, whose spontaneity, subtle improvisations and versatility could do justice to the demands of brilliant scripts and directors, leaving an indelible mark on the Malayali psyche.

But the roles he essayed showing the various shades of the grounded, rooted layperson of the 1980s are the ones that still endear him the most to Malayali sensibilities cutting across age groups and societal strata. ‘Lalettan’ is still revered by movie buffs mainly for his achievements and contributions in his first decade in show business.