Mithila, who married filmmaker Srijit Mukherji in December last year, said the newlyweds had been unable to live together under one roof but were reconciled to the situation.

In the film, Mithila plays Bonya Rahman, a multi-faceted working woman and singer who suddenly receives a missive in her mail, sent by long-estranged boyfriend Deepto, played by Vikram Chatterjee, who responds after 14 years on hearing her song posted on Facebook. Locked up in isolation, both reconnect and reminisce about their time together on a video call. Their virtual reconnection opens their only way out of isolation. 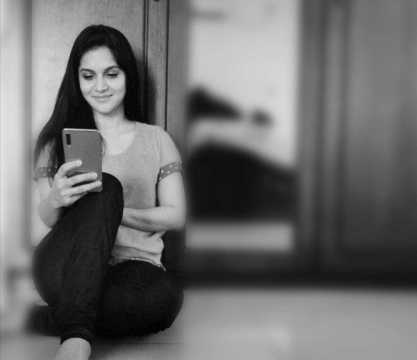 Mithila found the task of shooting for the short film quite daunting as she had to take her shots herself and requested her brother for help. “Polock helped me by creating a storyboard," she said. "But though he sketched the shots and explained the camera positions, we faced a lot of challenges in figuring out the camerawork. Normally, I concentrate on my character, but this time I had to also check the lights while working,” she explained. However, she came to enjoy the process.

Wanted to create the suffocating ambience we are in, says director Shahrear Polock on Dure Thaka Kacher Manush

Mithila works as head of the early childhood development programme at BRAC International. among the world's largest development organizations. Currently, she works from home five days a week. “Though I cannot shoot now, I stay quite busy during the day with office work and at night as well, as I have to take many calls [the two primary offices of BRAC are in Dhaka and in The Hague in The Netherlands]. I am also spending most of my time with my daughter, singing and painting together,” said the artiste who posted a dance performance on the birth anniversary of Rabindranath Tagore a few days ago. A delighted Mukherji had shared the video on Twitter.

“I try to stay positive with my daughter, planning new ideas," Mithila said. "We artistes are not easily satisfied with our work. We always want to do more. If we do not engage creatively, it takes a toll on our mental health. This film helped me a lot in this regard.”

The actress and activist believes Dhaka and Kolkata should come together more often for creative projects. Following her marriage with Mukherji, she was expected to shift to Kolkata and she was looking forward to doing more work here. But the COVID-19 pandemic and the subsequent lockdown applied the brakes on those plans.

“We did not expect to not meet for so many months," she said of her husband Mukherji. "It’s been almost five months since our marriage and we have not been able to live together under the same roof. The situation is unpredictable. However, we keep in touch through calls and messages. He has been writing scripts and I, too, am engaged in my work. Initially, we used to lament being separate, but now we have accepted our fate.”

While the film industry in West Bengal is moving ahead making 'lockdown shorts', Polock’s film is showing the path in Bangladesh now. “This kind of work has now just started in Bangladesh," Mithila said. "Meanwhile, I am keeping myself engaged with awareness programmes. I am doing a lot of live sessions to spread awareness about COVID-19.”