How Rishi Kapoor took his first steps in cinema


In this excerpt from his biography Khullam Khulla, written with Meena Iyer, the actor revealed the sheer joy and enthusiasm that he felt when his father, Raj Kapoor, decided that he should join the world of films.

While my acting debut as a toddler is well known, few know of a very early foray into Hindi theatre when I was about five years old, as a junior artiste at Prithvi Theatre. It was in a play called Deewar and I had to lie in my stage mother’s lap during a wedding scene. That is the closest I have ever come to doing theatre, but I do have the distinction of having worked with my grandfather [Prithviraj Kapoor] in that play. I have no other recollection of my theatre debut.

I may have been a reluctant two-year-old actor, but before I turned eighteen, my father had me hooked to the movie business for life. I was sixteen when he cast me as the young Raju, the film’s protagonist, in his semi-autobiographical film Mera Naam Joker (1970), a celluloid narrative in three parts. By now I was old enough to know what I was doing, and it is crystal clear in my mind that Joker was when I began to enjoy the film-making process. 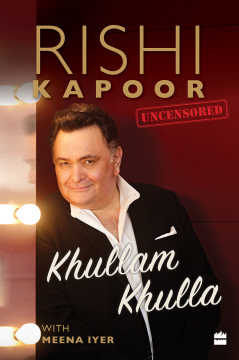 For something that would prove to be a pivotal moment in my life, even fetching me a National award, it began rather undramatically. My father casually handed me the script across the dining table one evening. The whole family was having dinner together when he asked my mother for permission to let me play the young joker. My mother thought about it for a while and agreed, with the caveat that it shouldn’t interfere with my studies or my attendance in school. Papa assured her that he would shoot my sequences only over weekends, so there would be no question of bunking school. I pictured us taking the Deccan Queen to Pune on Friday evening, filming for two days, and returning by Sunday evening to resume school on Monday.

As my head swung back and forth between my parents, listening to them discussing the matter so casually, I couldn’t believe what I was hearing. I could feel the excitement steadily growing, until I could hold it back no longer. I rushed to my room, pulled out a pad from my drawer and furiously started practising my signature, for future autograph hunters!

I hadn’t harboured any thoughts of becoming an actor until then, but I could feel the germ of ambition taking root. Shashi Uncle insists that he always knew I would become an actor, from the time I was four years old, because he would see me running to cry before a mirror every time my mother scolded me for being naughty. Perhaps there was some sort of subconscious desire to be an actor. In hindsight, I have to admit that whenever I visited my father on set, I could not stop playing with his makeup, using dark pencils to draw a beard or a moustache on my face and examining the effect in the mirror.