Actor Welankar will direct the play based on the life of Vinayak Damodar Savarkar.

Aroh Welankar (left) and Nikhil Raut will collaborate on a play on Savarkar&#039;s life

Film actors turning to direction is not something new in Marathi cinema. The list of those who have made the switch is quite long, but Subodh Bhave was the only one among them to direct the film version of a musical stage play, Katyar Kaljat Ghusli (2015). Now another actor, Aroh Welankar, has decided to wear the director's cap, but not for a film. Welankar is set to direct a stage play on the life of the freedom fighter and controversial Hindutva ideologue Vinayak Damodar Savarkar.

Titled Veer, the play will chronicle important events from Savarkar's life. Talking about how he got the idea, Welankar said "I have been a fan of Savarkar's courageous attitude and the hardships he went through. Two years ago I went to the Andamans to see the Cellular Jail where Savarkar was kept, and I could feel the presence of his extraordinary personality there. That is when I came up with the idea of making a play on him." 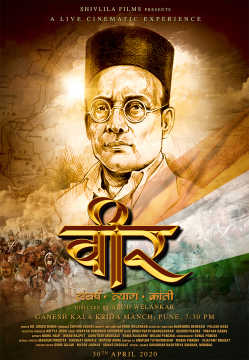 Nikhil Raut, who featured in the 2018 historical hit film Farzand, will play the role of Savarkar. Talking about the play and his role in it, Raut said, "I feel honoured that I have been selected to play this role. A true patriot, writer, orator, poet, heartwarming person and loving husband, you will get to see various shades of Savarkar's character in the play."

Produced by Shivkam Lonari, the first show of the play is slated to be performed on 30 April.