Have given a quarter of my life to Mee Vasantrao, says Nipun Dharmadhikari

The trend of biopics in Marathi cinema is not slowing down. In 2018 and 2019, we saw biopics of two revered artistes PL Deshpande and Kashinath Ghanekar. Now another biopic on classical singer Vasantrao Deshpande who left a huge impact on classical music, especially in Maharashtra, has been launched.

Mee Vasantrao teaser: Promises to be a hard-hitting musical biopic

Titled Mee Vasantrao (2020), the film stars Vasantrao Deshpande’s grandson and classical singer Rahul in the titular role. The film is being helmed by Nipun Dhardmadhikari who has made films like Baapjanma (2017) and Dhappa (2018). Earlier this week, the makers unveiled the first look and teaser of the film in a grand event at Yashwantrao Chavan Centre in Mumbai. The event was graced by the presence of great tabla player Zakir Hussain. 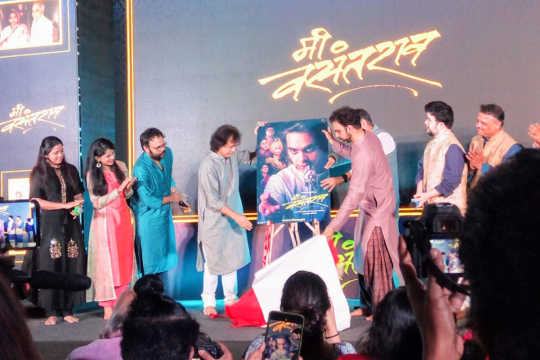 During the event, Rahul Deshpande recalled the struggles of making the film. "When Nipun and I were working on our play Sangeet Sanshaykallol in 2012,  I used to tell him many stories about my grandfather. Suddenly one day he said we should make a film on Vasantrao. I also felt that such a great personality definitely deserves a film on his life. Then Nipun started his research and finally came back with the script in 2013,” he said.

Dhardmadhikari is excited to finally show the audience a film that has been a big part of his life. “I have been working on this film for the last eight years. I have spent [a quarter] of my life on this film, and it's very close to my heart," he continued.

The filmmaker said he could have made the film years ago in a small budget, but that would have been unfair to Vasantrao. "If we wanted, we could have made some compromises and completed the film very early, but we felt that if we are going tell his story it has to be grand like Vasantaro ji's life. That’s why it took so many years to finally complete this film."

Mee Vasantrao is produced by Chandrashekhar Gokhale, Niranjan Kirloskar, and Darshan Desai. It will be presented by Viacom 18 Studios. The film is due to be released on 1 May, Maharashtra Day.