Working with Nemai Ghosh was the experience of a lifetime, says still photographer Rana Lodh


As a tribute from the disciple to his master, Rana Lodh will post photographs of Nemai Ghosh every day on Facebook.

Nemai Ghosh's work was far more eloquent than any documentation on him. Chronicler of Satyajit Ray’s life and works, Ghosh died on 25 March at the age of 86. His collection of more than 100,000 photographs is a fascinating treasure trove that not only covers the journey of Ray, but also those of all the artistes who were associated with the filmmaker.

There is ample documentation of Ghosh’s life and works. In 2018, Anirban Mitra and Tirtha Dasgupta’s documentary Nemai Ghosh: A Ray Of Light was screened at the Kolkata International Film Festival and offered a rare insight into his glorious career.

Cinestaan.com spoke to Rana Lodh, another veteran, low-profile still photographer from the Bengali film industry, who had the rare opportunity early in his career to work with Nemai Ghosh and observe him for a year.

Lodh started working with Ajit Ganguly’s Bichar (1980) and has had a long career, working with almost all the big directors in the industry. He worked on all of Nabyendu Chatterjee’s films, including Parashuramer Kuthar (1989) and Mansoor Miya Ka Ghora (2000), Raja Sen’s Damu (1996) and Debipaksha (2004), Aparna Sen’s The Japanese Wife (2010), Bappaditya Bandopadhyay’s Kagojer Bou (2011), Raj Chakraborty’s Chirodini Tumi Je Amar (2014) and Indraadip Dasgupta’s Kedara (2019). He has also documented those portions of Ketan Mehta’s Mangal Pandey: The Rising (2005) which were shot in Kolkata.

Lodh started working as a still photographer in the Bengali film industry without a guild card in 1975. Soon, the Federation of Cine Technicians and Workers of Eastern India got wind of it and he had to go through the requisite steps for a membership. Newcomers then had to work under an experienced photographer as an observer. Lodh's choices were Subhash Nandy and Nemai Ghosh, as both were handheld photographers. “Both used to take candid still pictures and I have followed their style in my entire career,” he said.

As one of the newcomers was Nandy’s brother, the spot with Nandy went to him. Lodh, thus, had to join Ghosh. “I saw Nemai-da sitting in a corner during the meeting. He preferred to be a recluse. I called out 'Nemai-da', and he said, 'I work with Manik-da [Satyajit Ray] and he doesn’t allow any outside photographer besides [his son] Sandip [Ray] and me. And it would be unjust of me if I did not involve my assistant in my work and just kept him sitting outside while I work inside'.”

Lodh, however, insisted that he would like to get a sense of Ghosh's working style. Interestingly, Ghosh knew that Lodh had bagged an award from HMV for doing a cover for Sunil Gangopadhyay and told him, 'What can I really teach you?' Ghosh, too, had been a competitor for the award with a cover for Uttam Kumar. 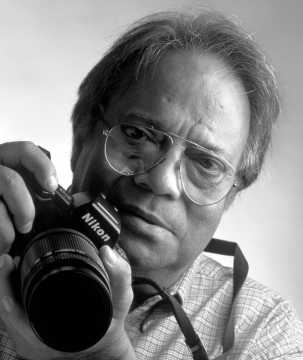 Ghosh was shooting for Goutam Ghose’s Paar (1984) in Naihati then. “He told me to go to Indrapuri studio in the evenings as he would be there after the shooting schedule. I would sit there as an observer. He would generally take 20 to 25 frames of a single shot and Manik-da would choose some of them to get printed. Nemai-da used to give me the contact sheet and ask me to select the frames from them for printing,” recounted Lodh.

During that time, Ghosh received an offer to work on Dipranjan Bose’s Parabat Priya (1984). “Nemai-da was then working on Paar and hence could not make time for Parabat Priya as well. He told me to take up the film and I was overwhelmed,” said the veteran, even though he was not allowed to charge for a film then as he was working as an observer. “However, I got the rare opportunity to have my photos selected by Nemai-da himself,” he said.

Lodh would generally work with an Asahi Pentax K1000 camera and Ghosh once offered to resell a Nikon F3 to him for Rs5,000, but that was a huge amount in those days for Lodh and he had to pass up the offer.

Lodh considers both Ray’s cinematographer Soumendu Roy and Ghosh to be his masters. While it is known that Ghosh got his hands on his first camera lying in a taxi, according to Lodh, he learned all the technicalities of photography from Roy and Purnendu Bose, the veteran cinematographer and later a guest faculty at the Satyajit Ray Film and Television Institute.

“Both Nemai-da and I were only allowed to work with Roy. I have also curated an album for Roy, in which half the photos were taken by Nemai-da and the remaining were mine,” said Lodh, who met Ghosh for the last time at a function at the GD Birla Sabhaghar a few years back.

“I don’t know what to say now. I have always followed him in my work and now I feel as if I have lost my father for the second time," said Lodh of the acclaimed photographer who preferred to shoot stills from theatre in his later years. "It was the opportunity of a lifetime to work with him for a year and be offered a film by him.”

Rana Lodh plans to pay tribute to his master by posting a photograph of him from his collection every day on Facebook.