On World Theatre Day today, the creative curator and producer speaks about Zee Theatre plays that you can watch on your DTH or OTT service.

Independent creative curator and producer Shailja Kejriwal has worked in different media over the years, from television to films and now theatre, though with a twist. Zee Theatre’s Teleplays brings curated plays on demand to watch whenever you want, on a DTH (Direct to Home) satellite channel or your OTT (Over the Top) platform.

Earlier this week, Kejriwal spoke with Cinestaan.com on telephone during the Maharashtra lockdown, where she urged everyone to stay safe at home. Like most of us in India these days, she was working from home as she spoke about her latest venture with Teleplays, her career in television and film, and learning from famed cinematographer Subrata Mitra as a young writer.

“I normally keep looking for different formats, trying to do different things,” she explained. “I just felt that there was a lot of stuff that we had in terms of our literature, and plays being the earliest form of literature that we had. I thought there is not much being done with the plays, [which] had wonderful stories.”

Growing up in Kolkata, West Bengal, Kejriwal had the opportunity to experience theatre often. But not many have the same opportunities as she did. 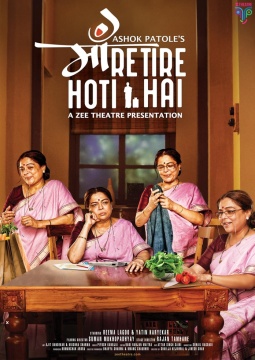 “People who are living in towns and cities where there is not much of this infrastructure and culture don’t get to see these wonderful works of different writers,” she said. “Then I thought entertainment is now being consumed sitting at home, I thought why not try and do something which would make these plays accessible to people, at whatever time they want or whatever platform they want. It just becomes a convenient way of watching this content.”

In an unexpected situation like this, when most people are confined to their homes, we can still catch a play on demand.

“In times like this, you have all the time in the world, at least it’s there for you to see. Also, it’s very important to archive such [plays]. I personally think that great playwrights should be archived,” she added.

Kejriwal started out as a freelance for Doordarshan in Kolkata and later moved to Mumbai in 1998 and began working at Star TV. From there she moved on to NDTV, became a producer in films as well with Madaari (2016), and launched a new channel, Zee Zindagi.

“We started with Kaun Banega Crorepati and [the] Balaji shows and that set up a trend of the kind of audiences that were wanting to watch it," she said. "They were usually considered to be men and women between the ages of 15 and 50. It was a wider audience.”

Her move, in between, to film happened, as she likes to dabble in different forms. “I’m not married to a particular form, because finally they are all stories. It’s just fun to figure out storytelling in different formats,” Kejriwal said.

One of her most cherished memories is spending time with Satyajit Ray’s cinematographer Subrata Mitra, after he had retired from films.

Calling it a fangirl moment, she said, “[Mitra] had these cameras which he used to give out to cinematographers. I just landed up at his house with this friend of mine, [who] had gone there to take the camera for his shoot, but I ended up asking him if he would teach me cinematography. He was a little surprised.”

When Mitra asked why she wanted to learn from him, she replied it was to better her writing. Eventually, after a week, she wrote a short story which he approved of and the lessons were on.

“His only thing was that I’m not going to ask you for anything apart from the fact that you have to be available at whatever hour I call. Once he called me at 4am! It’s a different experience learning from a maestro like him,” she fondly remembered.

The Teleplays catalogue contains 84 plays with another 17 in the pipeline, in different stages, taking the count to over 100. The plays available are in Hindi, English and a mix of the two languages. The regional content, like a few plays in Marathi, has just begun to be put together.

“The reason we wanted to do it in Hindi first is [because it] is a language more commonly understood by the majority of our country. How [do you] get people to see plays from different regions in other regions? How does a Bengali watch a Marathi play without knowing Marathi? Because the story is interesting and important,” she said, adding that the content is all translated and performed in Hindi.

The diverse archive is available on different platforms. “You can watch it on Tata Sky, DTH value-added services, Zee5 and Netflix," Kejriwal said. "We don’t put all the plays on the same platform, so we try and curate bunches of plays on different platforms, but on the value-added service platform, you would find all of them. You will find at least 10 new plays every month.

“It’s not for one person, it’s for different people with different tastes,” she continued. “The good part of having a bunch, so there is something for everybody, but it’s not necessarily that everybody would want to watch everything.”