Lacchavva was written in a day, says Jai Shankar A


The filmmaker talks about his short film, part of the Katha Sangama anthology, which received a special mention in the Best Short Fiction Film category at the 16th Mumbai International Film Festival.

The Kannada short film Lacchavva’s journey on the festival circuit came to an end at the 16th edition of the Mumbai International Film Festival earlier this year. Young filmmaker Jai Shankar A’s recent work picked up a special mention in the Best Short Fiction Film category as ‘a simple, feel-good story of India’s traditional rural-urban divide told effectively with realistic treatment and a stand-out performance by the lead actress’.

The film rests entirely on first-time actress Paravva, who was cast in the lead role after a long search by Jai Shankar. The director cited the casting as the film’s most difficult process in a telephone conversation after the festival.

“Once the story was ready, I wanted to cast a non-professional actor, because if I chose any actor, they would dramatize the acting,” the filmmaker said. “I thought we could only get realistic acting from non-actors. I started searching for a North Karnataka lady in Bangalore, but it was a very difficult process.”

For two months, Jai Shankar approached random strangers to find out their background and ask if they would be open to acting. He was rejected several times as people thought he wasn’t legitimate. He later expanded his search to include construction workers, who arrive in the city each day by tractors.

But he drew up short there as well since he was told that the village women won’t be able to speak and therefore won’t be able to act in the short. Luckily, a friend suggested a village in Hubli where the locals were open to cinema, as they had acted in a few plays.

“I went to that village and auditioned people there,” he recalled. “I gave them a few scenes to act. Usually in villages, there will be one woman who cries whenever a death happens. I asked for such a woman and then asked three or four women to cry. They instantly cried and it was very natural, even though they were faking it. That’s where I found Lacchavva.”

The filmmaker stayed with his cast in one place, where he relayed the story of Lacchavva to his lead actress. “Her real name is Paravva. So I used to tell her, you are not Paravva, you are Lacchavva, and you don’t have a daughter. Here in the story, you have a son. Forget that you have a daughter. I asked her to make sure [to call] the boy by the character's name. We literally stayed in the place where the story takes place,” Jai Shankar said.

The result is a completely natural performance by Paravva, who came up with her own dialogues. “We told her the gist of what she should convey and she used to convey it in her own way, using her own words,” he added.

Before the screening, Jai Shankar stated that part of the short was inspired by his relationship with his mother. “We fight a lot whenever we travel together,” he explained. “In the house, it’s normal condition, we are used to the circumstances. When we are travelling, she can’t catch up with my speed, and has to be instructed about everything. So, for many such reasons, we start fighting. But it does not last the next day,” he said.

This aspect was one of three things in his mind that led him to write the short. His cousin had also started a moving company and he was frequently interacting with the young men whom he employed. He found their stories very inspiring. “The path I used to commute every day from my home to office, the geography, the boys and my mother, all these things helped me to come up with the story,” he said. 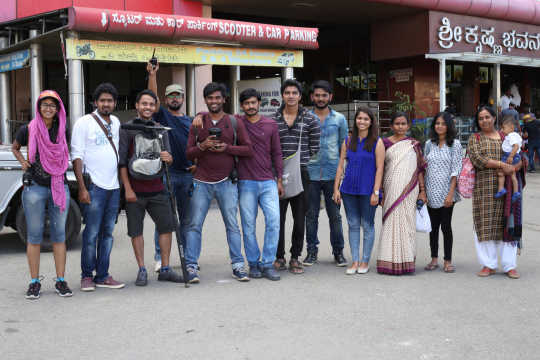 An engineer by profession, Jai Shankar explored filmmaking over the weekends. To fill his free time, he began looking into the creative pursuit.

“On the weekends, literally, there was nothing to do,” he said. “So I joined theatre. I acted in a few plays and then attended a few workshops of filmmaking courses. Even before that, when I was in engineering, I used to make short films using my phone or handycam with my cousins’ children.

“I learnt basic editing and music from YouTube and then, after attending a few workshops, I started getting better,” he continued. It eventually led to him making his first film, shot in a village, though it took him six months working on weekends to finish it. A Facebook post by a producer asked audiences to make a film on piracy, with future help on the next feature or concept being the main prize.

“That film was sent to film festivals and [at] one particular festival, I got a few awards [for] Best Film, Best Director and Best Child Actor. The jury of that film festival was a renowned actor and producer in [the] Kannada industry [Rishab Shetty], so he instantly gave me an opportunity to make a short for this anthology.

“He asked me to write a story which can be told in 20 minutes. I was so excited that I wrote the story and I narrated [to him] Lacchava’s story the next day. It was written in one day, after that awards night,” he said.

Katha Sangama, an anthology of seven shorts, was released in theatres on 6 December 2019. Lacchavva is the last short in it. The anthology is now streaming on Amazon Prime Video.