The Kashmir Files, Agnihotri's next film, was supposed to go on the floor on 16 March but has been postponed indefinitely because of the shutdown of the film industry.

With the entire country in near-lockdown state to try and prevent the spread of the deadly coronavirus, the film, television and OTT industries, too, have shut down all operations at least till 31 March. This shutdown, however, has hit hardest those behind-the-scenes members of these industries who get paid on a daily basis.

Filmmaker Vivek Agnihotri has decided to try and help them by selling off his paintings and using the money generated for the welfare of the daily-wage workers. “There are a lot of people in the industry whose livelihoods have been affected," the director of The Tashkent Files (2019) said in a statement. "I will sell these paintings for them.”

A press release issued by Agnihotri said he had tied up with the unions of junior artistes, the art department, stuntmen and other technicians to try and raise funds for them through his contact with non-profit organizations. “I can only help in my limited way," he said, "but hope it will encourage others to come forward.” 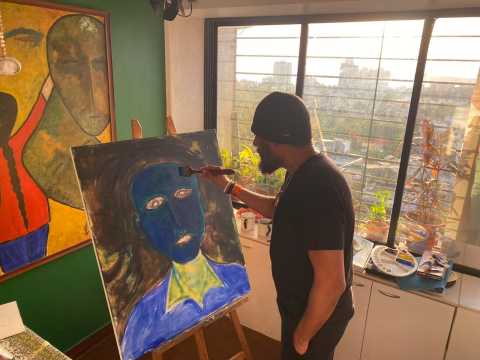 Speaking of his painting process, he said, "It takes me two days to complete a painting. I don’t know how long this lockdown will continue, so it’s best to keep working on my art. It’s important to be positive and put creativity to good use.”

On the work front, Agnihotri's next film is titled The Kashmir Files and will be based on the exodus of the Kashmiri Pandits from the erstwhile state of Jammu & Kashmir in 1989-90. The film was supposed to go on the floor earlier this month, on 16 March, but has been indefinitely postponed on account of the shutdown of the film industry.