The actress, who plays RJ Swarnaja in the emotional thriller directed by Soukarya Ghosal, feels women will relate to her character.

Koel Mallick will be seen as the protagonist RJ Swarnaja in Soukarya Ghosal’s upcoming emotional thriller Rawkto Rawhoshyo. Ghosal’s debut film Rainbow Jelly, an indie project, earned a lot of appreciation from critics and audiences alike. However, by casting Mallick in his upcoming feature produced by Nispal Singh, Ghosal has taken a giant leap into mainstream cinema.

For Mallick, Swarnaja posed a challenge for her as an actor. As she portrayed the continuous struggles of a single mother and a benevolent woman in the film, she was able to explore her potential as an actress like never before. In a group interview at the trailer launch of the film, Mallick shared her experience in detail.

Could you please tell us about your character Swarnaja?

I have done many films, and I have mostly played strong characters with a lot of confidence. However, RJ Swarnaja is a soft woman. She has faced defeat in every sphere of life, including relationships. The film chronicles how she reaches a certain point in her life when she finally bounces back from all the defeats.

See, certain characters give us the vibe of achieving victory from the very beginning. However, Swarnaja is vulnerable. Despite having been cheated or hurt repeatedly, she continues to nurture faith in the same people, who have made her life difficult. I think women in general will relate to her character.

Also, I think the film celebrates goodness over evil, rather than highlighting the feminine energies of Swarnaja. In most cases, especially in recent times, people have resorted to an eye-for-an-eye behaviour. Swarnaja, on the other hand, gets hurt, but doesn’t hit back in order to combat evil.

Swarnaja lives with her grandmother and a domestic help. The name of her son is Babai. Though the trailer might suggest the film is a thriller, it is emotionally charged as well.

We all have seen a poster of you holding a baby in your hands. Can you please talk about that?

That is from the look-test of the film, and the baby was merely 21 days old then. It was difficult to manage the shoot as we had to be careful that the baby didn’t cry. Amidst that, I had to deliver my expression. You must have seen that I am not quite happy in those photos, rather my expression is quite intense in all of them.

Who doesn’t love to hold a baby! I enjoyed it too, and Swarnaja is a lady who derives pleasure by spreading happiness among people. 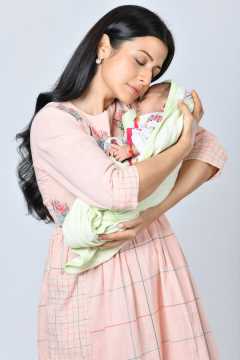 In the beginning of the trailer, we can see a child telling you that he wants to write a letter to God. If given a chance, what would you write in a letter to God?

The idea of writing a letter to God is very sweet in itself. I have a long wishlist. But I would still love to ask for overall happiness and security of people, and would also like to have the strength to derive happiness by ensuring the happiness for everybody around me.

(Laughing) Soukarya cast me as Swarnaja for valid reasons as we have a lot of connection.

What appealed to you most when you read the script?

I remember I was doing another film while reading the script of Rawkto Rawhoshyo. I was introduced to Soukarya through his wife Pooja (Chatterjee). In the script reading session, I was enjoying listening to an appealing story till there was a 360 degree twist in Swarnaja's journey, which brought me to my feet. So much happens in a span of six years in Swarnaja’s life, that it is quite incredible.

As Soukarya is a very good writer, he was explaining and narrating each of the characters with equal depth and command. Anyway, I was completely shaken by the twist in the story. Before that, I was listening to the story in a rather relaxed mood. See, now all of you know that Rawkto Rawhoshyo is an emotional thriller, but I didn’t know that then. The emotional intensity of the journey made me realise that the character of Swarnaja could remain special for me forever.

How did you find Soukarya as a director on the sets?

He is a very talented director. I loved his Rainbow Jelly as well. Very few directors have the quality of communicating well with the actors. If a director communicates well, the job of the actors becomes easier too. He even had the background score of each scene planned in his mind and that showed how detailed his vision was. He is extremely dedicated and passionate regarding his craft.

We had 92 changes throughout the shoot and it was an entirely hectic schedule. Of course, I have lots of memories from the shoot, but during the shoot, I had such an intense schedule that I could hardly make sense of those moments.

However, I must share that shooting the film took me through an emotionally disturbing or suffocating journey. We always wait for that moment to get into the skin of a character while shooting. During shooting for Rawkto Rawhoshyo, I was both happy and eager to have Swarnaja out of my system because I was so drawn to the character emotionally, that I was almost losing my sanity.

Watch the trailer below and let us know if you are keen to watch the film.