Directed by Lokesh Kanagaraj, Master stars Vijay as a college professor, Vijay Sethupathi as the antagonist, and Malavika Mohanan as the leading lady.

At the audio launch of Master (2020), which was held on Sunday evening in Chennai in a private ceremony with great fanfare, Vijay won hearts by publicly crediting his good friend Ajith for inspiring him to wear a tuxedo. In the wake of coronavirus scare, the event was only restricted to the film’s cast and crew.

Speaking on the occasion, Vijay said he was deeply upset that his fans couldn’t attend the event. 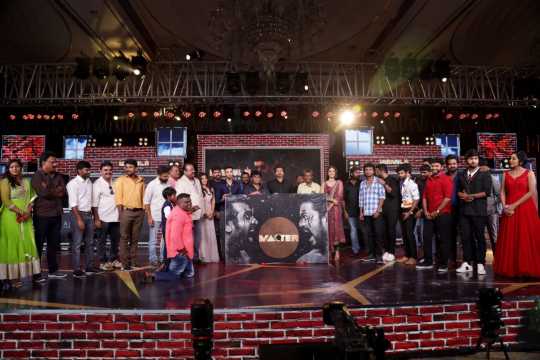 “Due to certain incidents that happened during the audio launch event (which involved some fans being injured) and keeping in mind the current scenario (the coronavirus spread), we had to do a private event. I am sorry, and thank you as always," the actor said.

As Vijay took the stage to address the gathering, he broke into an impromptu dance with music composer Anirudh Ravichander and actor Shanthanu Bhagyaraj, who has played a key role in the film.

The film stars Vijay Sethupathi as the antagonist. Vijay said he wondered why Sethupathi agreed to be part of this project.

“I went and asked him why he agreed to act in this film, and he said just four words for me, ‘I like you very much.’ Vijay Sethupathi doesn’t just share my name, but has also given space for me in his heart,” Vijay said.

Talking about director Lokesh Kanagaraj, Vijay said: “He used to work in a bank and do short films in his free time, and then suddenly made his debut with a complicated film like Maanagaram. Honestly, it took me time to adapt to his working style. Initially, on the sets, I realised he didn’t even distribute scene papers during the shoot. I actually got annoyed and thought I’ll go home! But thankfully, it all worked out. He doesn’t just have a plan, but a 'Master' plan. He ensures that smart work meets hard work.”

Vijay’s dapper look took everyone by surprise. Talking about his new look, he said: “My designer always asks me to try changing my dressing style. I thought I’ll dress like my friend Ajith for a change! Does it suit me?” he asked.

Master, which is produced by Vijay’s uncle Xavier Britto, is gearing up for release this April. The film will have a simultaneous dubbed release in Telugu as well.