Book excerpt: When Rajendra Kumar added his own flair to Raj Kapoor’s Sangam (1964)


The actor recalled his close friendship with the showman Raj Kapoor and how they worked hand-in-hand on the classic romance Sangam, in Seema Sonik Alimchand's new book, Jubilee Kumar: The Life and Times of a Superstar.

What a miraculous film Sangam was! A film reel of 19,550 feet, just three lead characters, two intervals; and yet, no one in the audience could budge from his seat — so gripping was the film! For the Europe schedule in 1962, I was required for just a week. But I stayed on with Rajji for all twelve weeks. He just wouldn’t let me leave. ‘No, don’t go,’ he would say. ‘Alone, I feel lost.’ And for the sake of our friendship, I did stay back.

I would go for the shoot every day to work with him, assist him in all departments, carrying camera batteries, sound machines, as he and everybody else did. We had no inhibitions, no airs that I was a star and he was the director. Everyone worked on every job. No one was a star. In Paris, we would go out every evening after work in a sleek luxury bus that picked up the whole crew after we had changed and freshened up. We would visit restaurants, clubs and bars.

I recall that when Rajji recorded ‘Dost Dost Na Raha’, I wasn’t there. I was shooting elsewhere. So when I heard the song for the first time, right before the shoot, I said to RK, “It doesn’t sound right. Song galat hai. It sounds contrived. How can you sing, ‘Dost Dost Na Raha’ to the very friend who has sacrificed his love for you? And the woman you loved, the one who married you — you accuse her of being unfaithful, of creating a situation where 'Pyar pyar na raha', where love is no longer love? It’s so wrong, so unfair! 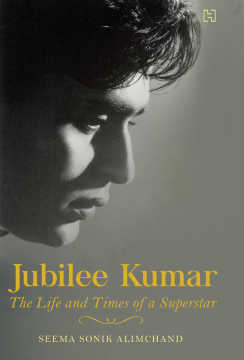 Rajji responded by saying, ‘The song is beautiful. Let me picturize it and then you will see. I will make sure I justify its inclusion in the film.’ Then for three days running, we shot the song, with Rajji playing the piano and lip-synching words reproaching his childhood friend for his betrayal, while I, in the role of Gopal, sat silently on a chair facing him, drink in hand, and Vyjayanthimala sat opposite me on another chair.

Finally, on the third day, I got up and told Inder Raj, the writer, ‘After the song ends, Gopal will speak, okay? I have a dialogue that I want to add to the scene.’ Then I told my friend RK, ‘Gaane ke baad shot lagaiye, main ek dialogue boloonga [Once the song is over, set up the shot. I have a dialogue to add].’ ‘Kya dialogue bologey, ji [Now what dialogue is that, pray],’ he asked.

‘Aap shot toh lagao. Why don’t you set up the shot first?’ I insisted. ‘Then you will see.’ Great filmmaker and good friend that he was, Rajji actually did set up the shot without further question. As soon as the song ended, I stood up and delivered my lines, before walking out of the scene. I could hear Raj shouting [in frustration] at Inder Rajji, ‘Dekho, Chacha, mere kiye karaye ki aisi ki taisi kar gaya [Just look at the way he screwed up all my good work, Uncle]!’

I turned around and retorted, ‘Yaar, tum jo teen din se gaana gaa gaa ke humari aisi ki taisi kar rahe the, uska kya [What about the torture you put us through over the past three days, singing to your heart’s content without pause? What of that, my friend]?’ That was typical of the banter we shared, [the banter that was a part of] our friendship. —Rajendra Kumar Tuli 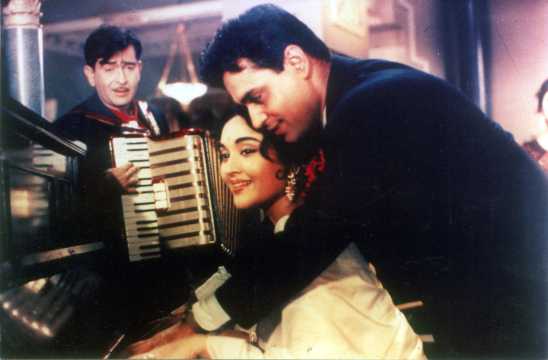 However, in the final version of Sangam, while every important scene had the camera panning out to film the trio in a deliberate trilateral shot, every verse of ‘Dost Dost Na Raha’ was justified to perfection by the master filmmaker with a montage of Rajendra Kumar’s romantic shots with Vyjayanthimala. And, yes, Raj Kapoor did allow his fellow actor to have the last word by retaining Rajendra Kumar’s closing lines: ‘Jo geetkar pe guzri, usne apne geet mein keh diya. Magar, Sundar, mere dost, kuch log aise bhi hote hain jin par guzarti hai, magar woh chup rehte hain. [Whatever suffering may have befallen the songwriter, he was able to lay bare in his song and unburden himself. But, Sundar, my friend, there are people in this world who suffer just as much, but choose to remain silent.]’

The moment those words were uttered by Rajendra Kumar in the role of Gopal, the audience in the theatres burst into applause and punctuated it with whistles of approval, thereby immortalizing the voice and the dialogue.

Excerpted from Jubilee Kumar: The Life and Times of a Superstar, by Seema Sonik Alimchand with permission from Hachette India. Click here to buy your copy now.