The indie filmmaker will make a web-series next.

While growing up, Banerjee loved to watch thrillers. Ram Gopal Varma was a major source of inspiration. As he grew older, he began watching Anurag Kashyap, Martin Scorsese, Steven Spielberg, Satyajit Ray and Tapan Sinha films, among others.

Banerjee started his career as a cinematographer while still a student. He gradually shifted his focus to learning the craft of writing screenplays and direction. With his short films being streamed on Pantaflix, Amazon Prime USA and Amazon Prime UK, he is hoping to extend his work in the digital platforms of India as well.

Tell us about your journey as a short filmmaker.

I started my career by assisting a few feature film directors in the Bengali film industry and also worked in a couple of mega-serials. I made my first short film, The Chase in 2015, and it was officially selected at 25 film festivals and received five to six awards. The film was made with Rs20. It was a five-minute short film, which I shot with my phone camera. It was just a one-hour shoot with two of my introducing casts.

I received a lot of exposure and a hefty sum as prize money because of that short film. So I started applying in many universities. After getting rejected repeatedly, I finally got lucky with the New York Film Academy, where I received a scholarship, and also made five to six short films during my course.

After I returned, I made two telefilms, Bahannobarti and Hashi for Rupashi Bangla, and three other short films titled The Mirage, Trinayani and One Night Stand. These short films also won many awards at film festivals in and outside the country. My sister, Indrani Banerjee has been one of the most inspiring figures behind my creative pursuit. 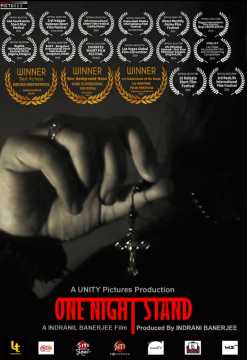 When did you come up with the concept of making a mini-series?

I formed my own production house, Unity Pictures. In 2019, I realised that no mini-series had been made in India. I researched with my cinematographer and made India’s first mini-series, 4 Shades of Leap. I attributed the title to the year 2020, a leap year. There are four episodes of five minutes each. Each episode is based on real-life horror story. The mini-series has been sanctioned by the UK Film Channel.

Why did you want to make a horror story, specifically?

I am an Anurag Kashyap fan, but when I watched the Netflix original, Ghost Stories (2020), I was thoroughly disappointed. After that, I thought of making a horror series with a naturally creepy look, without heavily depending on VFX. It has a simple story of a girl and has been widely appreciated.

You said that the horror mini-series is based on real-life incidents. From where did you get the stories?

I spoke to my friends in college hostels, did some research on the net and read magazines. That's how I got hold of them.

What are you planning to do next?

I am planning to do a web-series.

You aspire to work in the Bengali film industry?

Definitely! My team will be from Mumbai, but the language will be Bengali. Also, while studying in the New York Film Academy, I made friends from across the globe, hence, we have got a very good combination of talents. First, I am planning to start with a web-series and then I will take gradual steps to make a feature film.

Do you think there are enough opportunities to experiment in the Bengali film industry?

The lobby culture in the Bengali film industry cannot be denied. If an artiste is of my age, he or she will probably not get any recognition or opportunity. They need the stamp of experience or age for recognition. At the same time, there are opportunities for making good films too. For example, I recently watched Abyakto (2020) and liked it a lot.