Rawkto Rawhoshyo is an emotional thriller, which will be released on 10 April.

According to Ghosal, Rawkto Rawhoshyo essentially chronicles the journey of a mother. “The film might raise several questions regarding motherhood, on whether a mother is a protector or a best friend?” However, the writer-director also stated that the strength in Swarnaja’s character lies in her ability to combat evil with good.

“I think this is quite a tough battle for anyone,” reckoned the director. “Swarnaja means one who is born from swarna or gold. The film will clarify why I chose this particular name, but all I want to say is that her character is clean and upright. When I was writing the script, I could only think of Koel playing the character.” Ghoshal said he was introduced to Mallick by his wife Pooja Chatterjee, and when Mallick agreed to do the film, he felt, “the magic has already been created.”

However, the maker of the food fantasy film Rainbow Jelly (2018), was to experience more magic moments during the shoot. “Our entire team was new, and we had never worked with a star before. I was quite nervous about working with Koel, but the way she got into the character surprised me,” Ghosal stated. He thinks the intensity with which Mallick has pulled off her character was not an easy task. “She has perfectly etched out the thin line between the uprightness and vulnerability of her character,” he added. 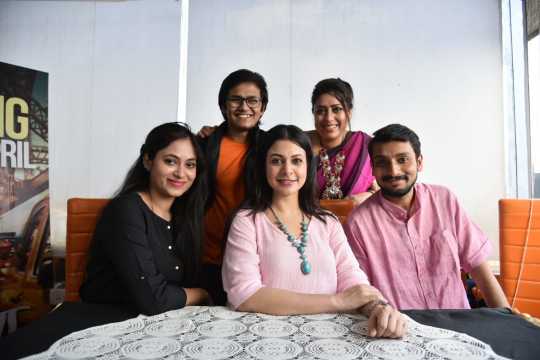 Ghoshal also recalled some of the moments during the shooting, when he was absolutely taken aback by Mallick’s ability to manage difficult situations. “As an indie filmmaker, I had no idea how to deal with situations while shooting with a star. When Raane-Da (Nispal Singh), asked me whether I would be able to manage shooting with Koel in the outdoors, I confidently assured him.”

The shooting was to take place in Canning, and the call time was 10 am. “When we reached the place, we found it had turned into a fair, with a gathering of more than twelve thousand people. There were vendors selling snacks too. We eventually required 70 company of West Bengali police to disperse the crowd. The shooting started at 2 pm. While I was almost losing my cool at the situation, Koel just came forward with Pooja, waved to the crowd, and managed to get out within minutes,” stated the director in utter amazement.

In another incident, he recalled, they went to shoot inside a public toilet to retain real location. “I went inside the bathroom and immediately ran out as it was smelling horrible and was in a terrible condition. The production team tried their best by spraying room freshener, but that did not help either. With a lot of nervousness, I went to Koel and clarified the situation. She just went to see the toilet, came outside and said that she would manage.”

The toilet also had a mirror, hence, no second person was allowed inside. The camera was somehow inserted through the door and Mallick gave the shot in a single take. The sequence can be seen in the trailer, as Mallick breaks down against a wall, crying profusely.

“I think, because Koel knew that the entire team was new, she consciously made efforts to keep her stardom at bay during the shooting. I think it's a big strength for an actor. Therefore, when we finished editing the film, we could see that the film had a completely different look. I don’t think I have ever seen Koel in such an avatar before, and I hope the audience will feel the same,” concluded Ghosal.