Divya Khosla Kumar takes on Sonu Nigam, accuses him of being ungrateful


The singer had slammed Bhushan Kumar yesterday for planting negative stories about him in the media and threatened to expose him.

Sonu Nigam had slammed T-Series head honcho Bhushan Kumar yesterday for allegedly planting negative stories about him in the media and threatened to expose him by releasing a video of an actress who had accused him of harassment in 2018.

Now, Bhushan Kumar’s wife, Divya Khosla Kumar, has entered the fray and countered Nigam through a couple of Instagram Stories.

Divya Kumar said, “Today it’s all about who can run a good campaign. I am even seeing people being able to sell lies and deceits with their strong campaigns. Sonu Nigam. Such kind of people know how to play with the minds of the audience. God save the world!” 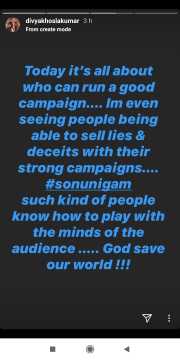 In another Instagram post, she directly addressed Nigam, saying, “Sonu Nigamji, T-Series gave you a break in the industry. It made you grow. If you had such enmity towards Bhushan, why didn’t you say before? Why are you doing this now for publicity?”

The actress-turned-director also dragged Nigam’s father, Agam Kumar Nigam, into the row. Agam Kumar Nigam has worked with her in the past. “I directed so many videos of your father for which he was always thankful. But some people are thankless (sic),” she said.

She mentioned Sonu Nigam’s old song ‘Achha Sila Diya Toone Mere Pyar Ka’ in a hashtag in an indirect taunt. The song was one of Nigam's early hits in the 1990s. 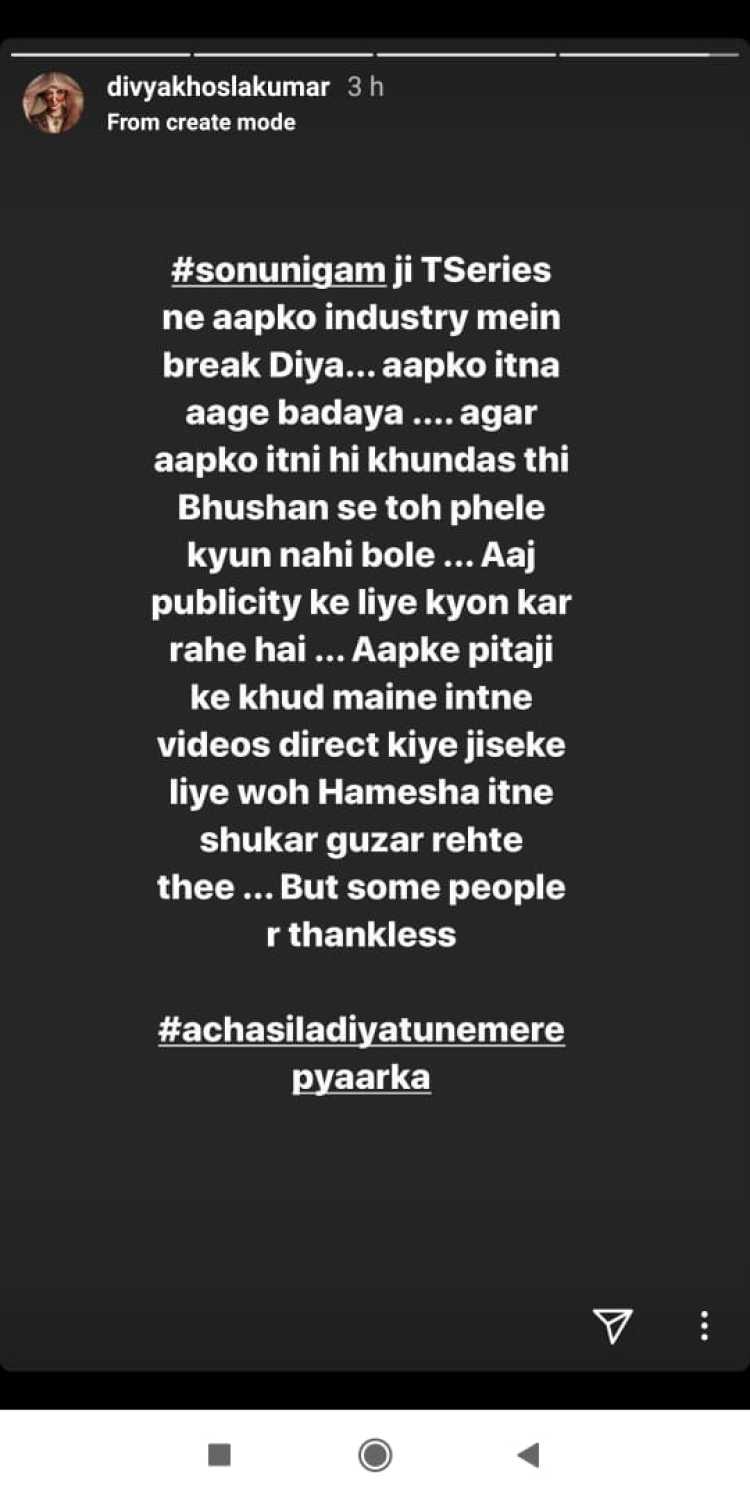 The row began when Nigam said that no one should be surprised if some people in the music industry also end their lives. His comment came on the heels of actor Sushant Singh Rajput's death by suicide on 14 June. Without naming anyone, Nigam said two music companies and two persons have all the power in the industry and decide who should be allowed to sing.

Then in another Instagram video on 22 June, Nigam lashed out at the T-Series boss for allegedly making a few people from the industry speak ill of him in interviews. Now, Divya Khosla Kumar has taken up cudgels on her husband's behalf.

Divya Kumar started her career directing music videos for T-Series. She made her acting debut in Ab Tumhare Hawale Watan Saathiyo (2004) and then directed Yaariyan (2014) and Sanam Re (2016). She is slated to return to acting with Satyameva Jayate 2.