Ghayal (1990) is among the best works of both director Rajkumar Santoshi and leading man Sunny Deol. Also starring Amrish Puri, Meenakshi Seshadri, Om Puri, Shafi Inamdar, Moushumi Chatterjee and Raj Babbar, Ghayal was not only a big box-office hit but also became a cult favourite and is remembered even today as it completes 30 years [the film was released on 22 June 1990].

Ghayal was an out-and-out commercial entertainer. But its cinematographer, the late Rajen Kothari, was better known for his work in 'parallel' or 'off-beat' cinema with the likes of filmmaker Shyam Benegal and Kundan Shah. Of course, the change in nature of cinema did not have any adverse effect on his work and Kothari went on to win the Filmfare award for Best Cinematography for Ghayal.

With Ghayal completing 30 years, Rajen Kothari’s son Pratik recalled his father’s work and shared some anecdotes he had heard from him about the film.

“Ghayal was very special for him," Pratik Kothari said of his dad. "It came in the phase of his career when he was just establishing himself [in commercial Hindi cinema]. He got recognition, so to say, in a wider sense. It is also significant because if you leave out Ghayal, most of his work [till then] was, for lack of a better word, in parallel cinema. It had its own leisurely pacing and slow camera movements. But Ghayal was completely commercial. It was at the other end of the spectrum.

“Even today, if people don’t remember Rajen Kothari the cinematographer, the moment you say he shot Ghayal, they have this instant connect. Many of us grew up on that film. He was also very fond of and proud of that work, if I remember.”

The story of Ghayal revolved around Ajay Mehra (Sunny Deol) whose elder brother (Raj Babbar) is killed by gangster-businessman Balwant Rai (Amrish Puri). Worse, Rai goes on to frame Ajay for the crime and he is sentenced to a long prison term. But the young man escapes and exposes Rai’s criminal world and avenges his brother’s death.

Pratik remembers watching the Ghayal videocassette repeatedly with his father. “I was hardly three or four when the film was released," he said. "But when I was in my early teens or pre-teens, we used to watch it several times. He used to tell me that this was the interval point and how a certain scene was shot.” 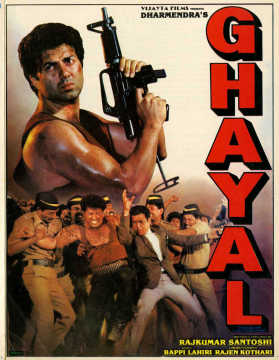 Recalling those days, he added, “We used to get a lot of those cassettes. The Ghayal cassette had a hard jacket cover with Sunny Deol’s picture. It was from the song ‘Pyar Tum Mujhse Karti Ho’. It had powerful music also in spite of being an action film.”

One of the best scenes of the film is at the climax where the shot is taken from atop a giant wheel as Ajay Mehra jumps down on Balwant Rai. It was shot at a real fair in Santa Cruz in Mumbai. “I remember visiting that mela as I have a picture from childhood. I remember its entrance had two elephants. Just today when I was looking at the scene, I realized that I have visited it,” said Pratik.

Although the scene was challenging from the cinematographer’s point of view, Pratik explained that it was trickiest for Amrish Puri. “In that scene Sunny Deol holds him tightly. A team of cops is trying to separate Sunny and Amrishji. It was a very difficult thing for Amrishji because he had been held so tight by such a powerful man. He was almost out of breath and gasping,” Pratik recalled his father telling him.

Pratik, who is himself an actor and director now, also recalled his father using their own Fiat car in a scene. “I think it is during the portion where they have put Kulbhushan Kharbanda under house arrest and they are moving around and trying to get to Balwant Rai. There are times when you are required to use your personal things for production design,” he said.

Another memorable moment in Ghayal is the chase sequence in a fish market. Pratik believes this would have been difficult for his father. “In a time like that to shoot a chase sequence like that, that too in a [fish] market while people are running around is certainly a challenge from the cinematography point of view,” he said. “It is a real fish market in Vile Parle (East). And my dad was vegetarian. So I don’t know how he shot it. The scene is very impactful for me whenever I see the film.”

Another scene that has always left an impact on Pratik is the one where Ajay Mehra receives the corpse of his brother played by Raj Babbar. “Then he calls up Shafi Inamdar and tells him what has happened. Then the police come and arrest him. It is very interestingly shot with the kind of grammar it had. Also the sequence where the truck is chasing him from Horniman Circle garden till he gets into the public booth.”

Pratik said his father was a rare cinematographer who would reject a project if he was not convinced by the storyline. “Once when he rejected a script for this reason, the other person said, ‘What do you have to do with it? You are a DoP [director of photography].’ But if he disagreed with the story, he wouldn’t do it. He would pick up scripts where he had a strong conviction that this story should be told,” he said.

“He didn’t care if it was told with commercial sensibilities or with a Shyam Benegal or Gulzar-like sensibility. He appreciated a good commercial film also. When people work in parallel cinema, they don’t necessarily agree with commercial cinema. But he wasn’t like that. He enjoyed Padosan (1968) and Andaz Apna Apna (1994) as much as he did Masoom (1983) or Maachis (1996).”

Pratik also said his father held Rajkumar Santoshi and his style of storytelling in high regard. “The other technicians were also fresh and upcoming. And they were really convinced with the story being told. So they didn’t mind going an extra mile [to make it happen],” he said.

Today as Pratik looks back, he feels his father connected more with stories about exploiters and the exploited. “I think my dad believed strongly in that. Along with Ghayal, he picked up a lot of work in this theme, like Damul (1985), Mrityudand (1997), Hu Tu Tu (1999, where he was an additional cinematographer) and most of Shyam Benegal sir’s work,” he said.