His condition is critical. He was brought to the hospital after having a cardiac arrest and that has cut off blood supply to his brain. His brain has suffered some damage as a result.

Malayalam writer-director Sachy aka KR Sachidanandan has been hospitalized in Thrissur after he sustained a cardiac arrest. The filmmaker is being treated in the critical care unit of Thrissur’s Jubilee Mission Hospital where he was admitted on Tuesday.

As per a report by The News Minute, a few hours after undergoing a total hip replacement surgery in another hospital in Thrissur on Tuesday, 16 June, Sachy reportedly developed complications and was eventually shifted to Jubilee Mission Hospital. 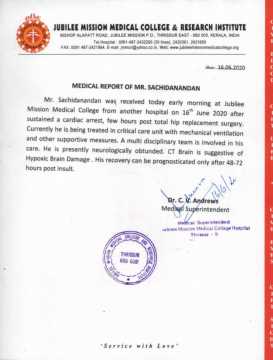 “He is being treated using mechanical ventilation and other supportive measures. A multi-disciplinary team is involved in his care. He is presently neurologically obtunded and his CT scan indicates hypoxic brain damage,” his medical report reads. The hospital has also stated that his condition can only be prognosed after 48-72 hours of observation, as per hospital’s source in the report.

“His condition is critical. He was brought to the hospital after having a cardiac arrest and that has cut off blood supply to his brain. His brain has suffered some damage as a result,"  the report stated.

Sachy made his directorial debut with 2015 Malayalam film Anarkali. His latest release Ayyappanum Koshiyum (202), starring Prithviraj and Biju Menon, was a blockbuster. The film is already getting remade in Tamil, Hindi and Telugu.

The film tells the story of its title characters, Ayyappan Nair and Koshy Kurian, who lock horns over an incident and their egos take them on a wild trip.

While Biju Menon played the character Ayyappan Nair, a policeman with unblemished records, Prithviraj was seen as a retired army havildar Koshy Kurian, who had put in 16 years of service.