Rana Lodh, who worked with Chatterji in his later years, said the filmmaker ran a tight ship and ensured that every artiste and technician was paid at the end of his or her shift and did not have to wait for pack-up.

Filmmaker Basu Chatterji, best known for his 'middle-of-the-road' cinema in the 1970s, worked predominantly in Hindi, creating a new genre of romance and comedy with relatable characters.

Chatterji also worked in Kolkata and Bangladesh for a while and directed a few television and film projects, including Hothat Brishti (1998), Chupi Chupi (2001), Tak Jhal Mishti (2002) and Hochheta Ki? (2008). “He had an apartment here in Ballygunge, where all crew members would gather often,” recalled still photographer Rana Lodh, who started working with Chatterji with the television series Jodi Amon Hoto.

The show was produced by Goutam Banerjee, son of legendary actor Bhanu Bannerjee. “After directing the television series, he left for Mumbai again for a few years until he returned to Kolkata and directed Hothat Brishti," said Lodh. "It was jointly produced by Saregama HMV and a Bangladeshi producer, who had produced Padma Nadir Majhi (1992).” The same producers also made Chupi Chupi and Tak Jhal Mishti later and Lodh worked on both those projects as well.

Hothat Brishti, featuring Ferdous Ahmed and Priyanka Trivedi, was a remake of the National award-winning Tamil film Kadhal Kottai (1996), which was later also made into a Hindi film, Sirf Tum (1999). Certain portions of the film were shot by Mrinalkanti Das, Sumon Deora and Akhtar Hossain in Rajasthan. They were mostly outdoor sequences that required to be shot in daylight.

“We went with a small crew with only cameras and thermocol sheets," recalled Lodh. "Two other films — Naseeb (1998), featuring Govinda, and Kachche Dhaage (1999), starring Ajay Devgn — were also being shot there at the time and we could see how Basu Chatterji was reveered by those artistes and the production units.” 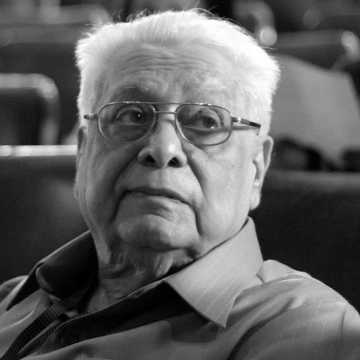 Some of the sequences were shot in the sand dunes of Jaisalmer. “We, despite being so young, were not able to walk on the blazing sand and were shooting sitting on camels, but Basu-da was walking tirelessly," the photographer recalled. "I remember his white skin turning crimson in that heat. We requested him to ride a camel, but he refused.”

Every morning, Chatterji used to take the unit to some special vegetarian restaurant and they would all eat together, including the artistes. There was no special arrangement for anybody. “Every night most of the technicians would love to have drinks and Basu-da would give each of them Rs200. I didn’t drink, but I would have all the delicacies everyone else was having,” Lodh said.

For Lodh, each and every moment he spent working with Chatterji is precious. The late director was impressed with the frames that Lodh shot on the sets of Hothat Brishti. In fact, Lodh was the only crew member from Kolkata for Chatterjee’s next film Chupi Chupi. The rest were all from Bangladesh.

Chatterji had asked Lodh to buy two special brands of whisky from Kolkata when he went to shoot the film in Bangladesh. “Quite naturally, I was held by the immigration for carrying whisky," he recounted. "Thankfully Soumitra-da [actor Soumitra Chatterjee] had reached by then and he has an immense fan following there. As he waved at me at the airport, I was set free by the officer,” said the veteran.

Chatterji always ran a tight ship. He never allowed too many spot boys on the set and insisted that the artistes help themselves while having food, like all the other technicians. “He would rather give back the money needed for extra spot boys," said Lodh. "I remember, Priyanka Trivedi had become quite popular after the success of Hothat Brishti. While shooting for the next film, she asked for bottles of mineral water for herself. As soon as Basu-da got wind of it, he ordered the unit not to spend a single rupee to buy mineral water and asked her to have the water arranged for the technicians or buy the mineral water herself.”

On the sets, Chatterji would take charge of the camera and trolly himself while the cinematographer would primarily focus on the lighting. “He would make sure each and every artiste and technician was paid at the end of the shift so that no one had to wait for payment until pack-up” Lodh said, lamenting the current situation in the industry where technicians need to wait for months sometimes to get their dues.

Chatterji’s daily evening ritual was to don a silk kurta and lungi and sit down for drinks with the technicians, never mind the age gap. “We would have long adda sessions," Lodh said. "From one of those sessions, I got to know that he was a cartoonist and used to worked for the weekly tabloid Blitz. Perhaps that was why he understood the nuances of comedy so well!”

Chatterji was also not above teasing the actors and actresses who failed to impress him. And when anxious, he would chew on the corners of his handkerchief.

Lodh recalls Chatterjee as a golden-hearted man despite being snobbish at times. To experience the professionalism of the great director, who launched artistes of exceptional talent like Amol Palekar, was indeed a privilege for him, he said.

With Basu-da gone last week at 93, Lodh remembered those moments when he would often drop by at his Ballygunge apartment and help create albums of the photos he had taken of him.