Felt like part of a family on the sets of Bulbbul: Paoli Dam


Paoli Dam speaks about the pleasures of working in a Clean Slate Films project and the manner in which she approached her character Binodini in the supernatural thriller.

Paoli Dam’s performance in Anvita Dutt’s directorial debut film Bulbbul (2020), a supernatural thriller released on Netflix on 24 June, has been widely appreciated. Dam plays the most layered character of the film that exposes the rotten aspects of a misogynistic, patriarchal society. Though set in the 19th century, Bulbbul explores the innate hypocrisy of society that thrives till date.

Dam's Binodini represents innumerable women who have been victimized so many times by patriarchy that they begin to normalize the evil practice in their own lives. In an interview with Cinestaan.com, she shared her experience of working with a team of fresh talents. Excerpts:

How did you get the offer for this film?

I got a call from Clean Slate Films and they wanted to send me the script. We all know about the great content the production house led by [actress] Anushka Sharma and [her brother] Karnesh Sharma has produced so far, starting from NH10 to the recent critically acclaimed web-series Paatal Lok.

Naturally, I was quite happy to receive the offer from them. I was quite impressed with the way Anvita incorporated the narrative of suppression on 19th century women through a folklore. I, too, was fascinated [as a child] by stories of woman demons, ghosts and witches in the fairy tales. For the first time I got the opportunity to work in such a period film, filled with elements of love, longing and revenge. 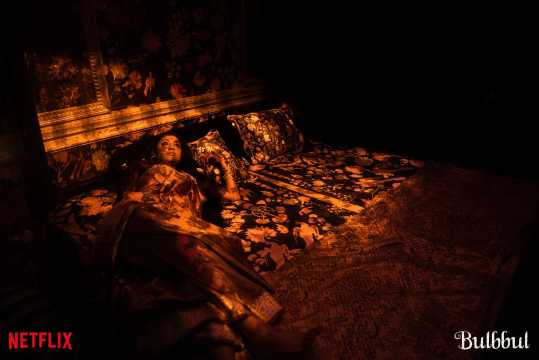 You have the most realistic and one of the more crucial characters in the film. Binodini is both a victim and a perpetrator of patriarchy. How did you approach it?

Yes, Binodini has been so conditioned and seasoned with the practices of a misogynistic system that she never grows the agency to put forward her own wishes and desires as a free woman. When I first read the script, I found the character to be extremely cruel and mean. Then I discussed with Anvita and asked whether she wanted me to approach the character the way it was coming across to me.

She advised me to look at Binodini as a child who has been instructed from the very beginning to function according to the norms of the system, with a boundary drawn around her. She never developed the maturity to make that leap of faith and go against it.

I have always played strong female characters who can fight for themselves. For the first time I got to play a victim, one who has been conditioned to live in a bubble. She has a tremendous emptiness, and she desperately seeks love and care owing to not having been married to a so-called normal person. She has been made to believe that it doesn’t matter that Mahendra is insane; his position as a Thakur is what matters.

I felt pity for the character, as if she remained a bud in her narrowness and could never bloom. Instead of expressing her desires, she locked them up within herself and continued to believe in all kinds of superstitions. Also, she knew that she did not have the title of Badi Bahu [senior daughter-in-law] and hence, she did not have the position to command power. For the same reason, she envies Chhoti Bahu Bulbbul because it is ingrained in her that she would always have to be submissive.

So how did you prepare for the role?

Anvita’s suggestion changed my perception of the character and that’s when I decided to send the message regarding suppression of women through her character. On the other hand, I did not have much time to prepare for the role as I was the last person to come on board. While everyone else could attend the workshops under casting director Atul Mongia, I could only join in the second schedule. Before that I had to approach the character on my own. However, my performance somehow synched with their idea and both Atul and Anvita were happy to see my work in the rushes.

When I identified the innocence of my character, it became rather easy for me to do the job. We had gone to the location before the shooting started and the entire process turned into an internal journey. Also, I love to watch period films a lot and read literature based on those days. Old structures and ambience appeal to me. All these factors, coupled with the incredible teamwork, made my job easy. It’s brilliant the way all the characters have been presented with their looks. I am so thankful to Clean Slate Films for giving opportunities to fresh directors and sets of artistes.

You have worked in Hindi films in the past, but this is your first digital release. Was there any difference in the shooting experience, that too with a team led by a first-time director?

Anvita is a newcomer, but the way she handled the entire project was kind of unreal. She has a beautiful way of explaining things and I often used to look at her in awe when she spoke. It’s true that I have previously had good experiences while working in other Hindi films, but I must admit that it felt like working with a family on the sets of Clean Slate Films. I was extremely well taken care of and pampered.

Also, I must say having a digital release is an entirely different experience than a theatrical release. Of course, the thrill of watching a film on a 70mm screen is a larger-than-life experience. On the other hand, Netflix is allowing a folklore-based story from India to be viewed in 190 countries at the same time. Because of the huge reach, the audience is not limited to India any more.

While I really enjoyed working in the film, I hardly expected such a positive response to it. I am happy for the entire team.

Tell us about your experience working with your co-stars.

It was beautiful! Tripti is such a sweet girl. She is new and has the eagerness to learn. She was always in that zone. She was doing workshops for a longer period. Avinash, too, was extremely focused and humble. We used to chat a lot. Avinash loves to travel and he used to share those stories.

It was the first time I worked with Rahul and it was a dream-like experience for me. I must tell you about the sequence where he rushes into my room after the rape. He could have easily started panting and rushed to the room. Instead, he ran through the entire corridor and the staircase and then came up again and crossed the corridor to make the panting and exhaustion look real and natural. It was an experience to watch him approach his characters.

Off screen, Rahul is the most humorous person to be around. He is extremely witty and often while speaking to him I ended up embarrassing myself. Hence, I used to keep shut! But it was so much fun!

It was also so nice to have Param, with whom I have worked and whom I have known for so many years, in this uncharted territory of mine.