PC Sharma’s short Hindi documentary Premchand and Kuldeep Sinha’s We Remember You on Rafi are available free on the Films Division website and YouTube channel.

The Films Division of the Union information and broadcasting ministry is screening two documentaries to commemorate the 140th birth anniversary of writer Munshi Premchand and the fortieth death anniversary of singer Mohammed Rafi today (31 July) on its website and YouTube channel. The documentaries are available free for viewers.

PC Sharma’s short Hindi documentary Premchand and Kuldeep Sinha’s We Remember You on Rafi are now available to admirers of these two legends in their respective fields.

The 20-minutes documentary on Premchand will offer glimpses of the journey of one of India's foremost modern authors, known for his novels and short stories. The first president of the Progressive Writers' Association, Premchand wrote 12 novels, more than 300 short stories, and several plays, and is often referred to as Upanyas Samrat, or king of novels. 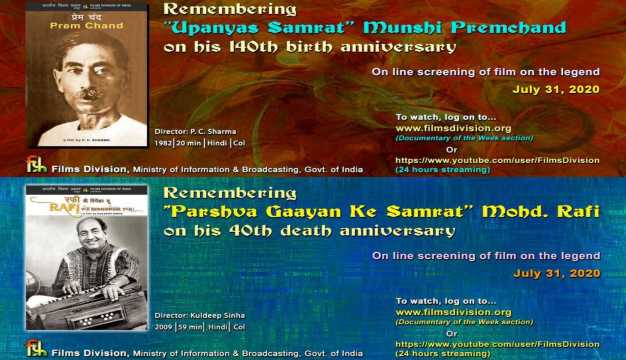 Audiences will also be thrilled to watch We Remember You, an hour-long documentary on Rafi, not only filled with some of his more memorable songs, but also with some of the most precious moments of his journey as one of India's most celebrated playback singers. Sinha’s documentary also features contemporary artistes offering their tributes to the legend.