The veteran choreographer elevated song picturizations to another level, making instant stars of the artistes who danced to her beats.

Photo: Courtesy Saroj Khan on Instagram
give your opinion

With Saroj Khan’s death today, the Indian film industry has lost an immense talent, and a carrier of its rich dance history. The veteran choreographer died of cardiac arrest this morning in Mumbai; she was 71.

In the documentary, The Saroj Khan Story, on her life by Nidhi Tuli, she noted in the opening, “I've learned from life only. Never depend upon anybody.” A graceful and talented dancer, Khan showed an inclination for dance as a toddler.

Her parents arrived in Mumbai from Karachi, Sindh, now in Pakistan, after Partition and, like millions of others, had to start again from scratch. Khan was born Nirmala Nagpal on 22 November 1948. The family lived in a small flat in Mahim, Mumbai. She had five younger siblings, four sisters and one brother.

Thanks to a doctor with connections in the film industry, Khan began appearing in films. She played the child version of actress Shyama in a dream sequence from a film and in Aaghosh (1953), she lit up the screen as a young Radha to Baby Naaz's Krishna.

After her father’s death when she was only 10, times were dire and the young Nirmala had to work hard to support her family. She later became a group dancer to stars like Madhubala in Howrah Bridge (1958).

Fellow dancer Sheela recalled that Saroj Khan used to memorize the lead dancer’s steps as well. Impressing B Sohanlal, the famed dance director from the South, with her natural knack for picking up steps and movements quickly, she graduated to become his assistant, even teaching actress Vyjayathimala in Dr Vidya (1962).

“She was so intelligent and quick to grasp,” the veteran recalled in The Saroj Khan Story. She remained Sohanlal’s assistant until 1973, breaking away the following year to become an independent choreographer, upon the actress Sadhana’s recommendation for her directorial debut Geeta Mera Naam (1974). 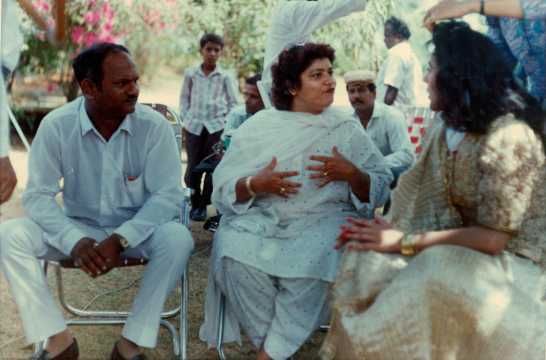 There was a 20 year age difference between her and the dance director when she married him at 13. “He gave me bread and butter, he gave me name. Today, if I am known for my dance, it's because of him,” she said of her mentor. But after their son was born, the two separated and Khan had to struggle to get projects and make a name for herself. She got married a second time, this time to Sardar Roshan Khan.

In the 1980s and 1990s, thanks to her collaborations with filmmaker Subhash Ghai, and two actresses, Sridevi and Madhuri Dixit Nene, she remained in constant demand. Both rivals took her dance steps to another level as many of those songs became crazes. The Filmfare award for Best Choreography was initiated essentially because she could no longer be ignored. She won the first award for 'Ek Do Teen' from Tezaab (1988); she would win the trophy another seven times for a record that is yet to be broken.

Today, Madhuri Dixit Nene wrote that she was ‘devastated’ by the passing of her guru. Fittingly, the last song Saroj Khan choreographed was also for her, 'Tabaah Ho Gaye' from Kalank (2019).

I'm devastated by the loss of my friend and guru, Saroj Khan. Will always be grateful for her work in helping me reach my full potential in dance. The world has lost an amazingly talented person. I will miss you💔 My sincere condolences to the family. #RIPSarojji

Khan, who later launched own dance school, Saroj Khan Dance Academy, believed that she arrived during a golden period of the film industry when everyone was dedicated to their work. She often said the industry was like one big family and she was known and beloved by everyone who worked on the sets.

Khan was the last of the choreographers who knew how to adapt classical Indian dance for the big screen and make it look effortless. Nowadays, with remixes and most songs relegated to the background for a montage, the Hindi film song has seen a 180º turn, back to its early days. The traditional Indian dances, like Kathak and Bharat Natyam, are rarely seen any more.

Saroj Khan won her second National award for the Tamil film Sringaram (2006), where she was awarded for choreographing all the songs. During her youth, she sacrificed her sweat and tears to make sure she learnt the correct postures and techniques so that she could be worthy enough to teach others.

A hard taskmaster, Khan even got actors like Sanjay Dutt and Sunny Deol to groove to her steps. And if she could make Madhuri Dixit compete with Aishwarya Rai in the period song ‘Dola Re Dola’ from Devdas (2002), she could make Kareena Kapoor display the exuberance of life in ‘Yeh Ishq Hai’ from Jab We Met (2007), for which she won her final National award. More than the instantly viral dance steps, it was the mood and expressions of the stars in the songs that kept us captivated, and that was entirely Saroj Khan's imagination and doing.

With over 2,000 songs to her credit as choreographer, the veteran had been working for over 60 years. Her son Raju Khan followed his mother into the profession. In the 1990s, Saroj Khan took up screenwriting for a bit for films like Khiladi (1992), Hum Hain Bemisaal (1994), Chhote Sarkar (1996) and Hote Hote Pyaar Ho Gaya (1999). And for a new generation, she became a television presence and name thanks to her judging stints on shows like Nach Baliye, Boogie Woogie and Jhalak Dikhla Jaa.

Saroj Khan, who was a member of the Cine Dancers Association from a young age, was quite vocal about the rights of the group dancers in the background, having been in their shoes early on in life. Her name amongst dancers and stars was telling — she became known as ‘Masterji’ in a patriarchal industry. The term choreographer is of recent,origin in Hindi cinema. Earlier, they were known as 'dance masters'.

Saroj Khan rose from the ranks to become one of the greats. Her trajectory is both commendable and tragic. Even as the times changed around her, she refused to give up, sticking to what she knew best.