Richa Chadha looks back on the making of Neeraj Ghaywan's directorial debut film, which was released on 24 July 2015, and explains why it is important to be a part of good cinema.

Every few years, a special film comes along that sweeps most people off their feet. Neeraj Ghaywan’s directorial debut Masaan (2015), set in Banaras, Uttar Pradesh, balanced both joy and sorrow when dealing with the lives of its protagonists, Devi, Deepak and Shaalu. Written by Varun Grover, the film starred Richa Chadha, Vicky Kaushal and Shweta Tripathi.

The quiet drama was premiered at the Cannes Festival in the Un Certain Regard section and also picked up the FIPRESCI prize and the Prix de l'Avenir. The Indo-French co-production soared on every level, from its cinematography by Avinash Arun to the music by Indian Ocean, and, of course, the heart-breaking performances by its leads.

Chadha spoke to Cinestaan on the phone about her experiences on the film and why it remains so special to her. The Filmfare award-winning actress had appeared in Oye Lucky! Lucky Oye! (2008), Gangs Of Wasseypur (2012), Fukrey( 2013) and Goliyon Ki Rasleela: Ram-leela (2013), but her portrayal of the young woman from Banaras remains a standout in her filmography. Excerpts:

When you first got the script, did you say yes to the film straightaway or did you have to think about it for a while?

No, I didn’t have to think about it because Neeraj was developing it and keeping me posted at every stage of development.

Okay, so you knew about it even before the script was written?

When he was writing the script, when he was researching for it, this was a few months after Gangs Of Wasseypur was released, and he was like, I’m doing some research, when we were shooting in Banaras, I got a lot of opportunity to do some digging and meet people and I’m coming up with a story, would you like to be in it? I said yes.

Then he started developing a script with Varun. Then, after a few months, he came back and told me what it was about. So because I was always involved in the process, I didn’t ever think I will not do this.

Before the jarring hotel sequence when the cops barge in, Masaan opens up thinking it's going to be a different sort of film. What did you feel about the story the first time you read it?

I thought it was a really brave film and that it reflected the reality of India, the smaller towns where people have access to internet, but they are also torn between very traditional societal norms and people around them, often families stopping them, and things like that. It is definitely very interesting and a parallel voice, which is why I wanted to do it. And it dealt with things like caste and everything, so it sounded very interesting to me.

Your character Devi is walking around with so much grief inside her that she can't convey, plus those who work with her have already made up their minds about her character. How did you process all of Devi's conflicting emotions?

Apart from doing readings, I had long chats with Neeraj, and he and Varun, as part of their research, did a lot of interviews with young women, between 20 and 24, who are working in Banaras and Allahabad, who were working in a small set-up — sometimes they were in a coaching centre, sometimes they were accountants — and asking them, were they interested in going and meeting a guy on a date? Did they ever come across pornography? Those kind of things, so it was so detailed and nuanced that I had a very clear idea of what this girl is. Apart from that, he [Ghaywan] gave me a whole bunch of reference films to watch. I had very sorted research and preparations before we went to the floor.

Did you all rehearse the scenes as well?

Yes, we rehearsed scenes, but not so much. Because, see, most of my scenes were with my father [played by Sanjay Mishra] or I was alone. And there was no rehearsal required for the lovemaking bit, obviously. And Vicky and I only meet at one point in the film, right? So for me, it was a very solo journey. I think that’s also why the film is very special, because a lot of it, even in the shooting, I was alone, going on a bus, on a boat, travelling in a train, in a rickshaw. 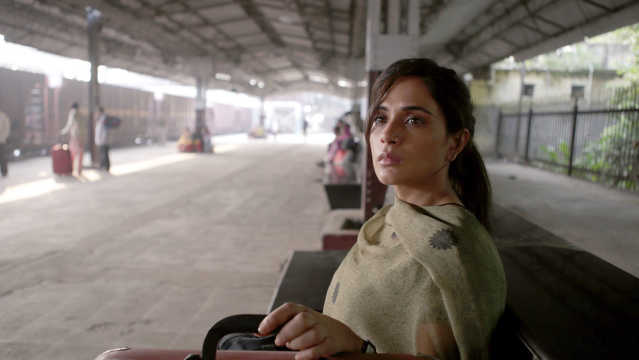 Like you said, the scenes with your father, there is a powerful confrontation scene in their home where Devi finally lets out some of her frustrations. How was it like to shoot that with Sanjay Mishra?

So for things like that we definitely did rehearse a lot, because then there was a back story, this girl’s mother had died when she was young and her father blames himself because there was negligence or whatever, and she tries to tap into that. He has some guilt, she has some guilt, so for those things we did talk a lot before we performed them. And that’s how we went ahead with it.

How was it like shooting on location in Banaras? Did you spend more time there or were you only there for the shoot?

Looking back, how do you think the film changed your career?

I don’t know how or if it has changed my career substantially, but it’s definitely a film that I am very proud of in my filmography. And I’m very proud that this film represents something for so long and for so many people. Sometimes I think our job as creators is to just push people in one direction, and then more films on the subject are made, and more people get into the industry. Neeraj was a debut director, but he is such an asset for our film industry.

Do you think the film was ahead of its time? More films nowadays are set in smaller cities and deal with the lives of ordinary Indians. Masaan was one of the first to tackle it, I suppose.

No, not at all. There have always been films, like the first few films of Prakash Jha, Mani Kaul, Sudhir Mishra, alternative filmmakers like Mrinal Sen, Ketan Mehta. They have always been doing this, but yes, even recently there have been films about subjects like Peepli [Live] (2010) or Newton (2017). Films like these were always made, it’s just that Masaan got a lot of international attention at Cannes so it benefited from that.

I think it wouldn’t be fair to say this is the first film to talk about caste, there have been lots of films before. Now you can watch them on MUBI or any of the online platforms, so there was a realistic movement even before that.

Why should I not speak? I am not going to keep silent: Richa Chadha is in the mood for Panga

You mentioned Cannes. How was the experience like, watching the film with an international audience? Was it the first time you were seeing the film or had you seen it before?

No, that was the first time I was seeing the complete film. Before that we had seen some bits for dubbing and things like that. When we watched the film for the first time, with the sound, the final credits, obviously it was a very moving experience. It was a once-in-a-lifetime experience for me also, because we had a huge standing ovation. Cinema lovers appreciated that film a lot. So yes, I was very happy.

Even five years later, the film is beloved by audiences. Why do you think it is so?

Because it’s a film. It’s not a play... when you say a thing of beauty is a joy forever, it’s so true for any cinema, because cinema is immortal. When you create something, it lasts forever. We are still watching the films of Satyajit Ray and Ritwik Ghatak, and we are still watching the amazing films of Federico Fellini. Films have nothing to do with their time as such, they live forever, so it’s important to be in good ones.