As Vikramaditya Motwane's film, which also starred Ronit Roy, completes a decade, its leading man recalls interesting incidents leading up to its making.

Each year thousands of aspiring artistes land up in Mumbai in search of that one big break in Hindi cinema. But the struggle is so hard that most are often forced to lap up even inconsequential parts just to be able to pay the rent and keep body and soul together.

Rajat Barmecha, however, was an exception. He landed the lead role in his very first film, Udaan (2010). Directed by Vikramaditya Motwane and produced by the now-defunct Phantom Films, the movie revolved around Rohan (Barmecha), who is suspended from college along with his friends for inappropriate behaviour. He returns home to Jamshedpur in Jharkhand to live with his single dad, Bhairav Singh (Ronit Roy).

That is when Rohan is shocked to learn that he has a half-brother through his father's second marriage, about which Bhairav had never told him. This is just the beginning of Rohan's troubles. He decides to be a writer but Bhairav Singh, who is the epitome of cruel behaviour, wants him to start working in his factory, come what may. How Rohan flies from the cage forms the rest of the story.

Udaan was released exactly 10 years ago today. Asked how he feels to know the film is still loved by its audience after 10 years, Barmecha responded, “I feel good because by knowing this I realize it has been 10 years (laughs). When you think about 10 years, it feels like a lot because everything is still so clear in my mind.” Excerpts from an exclusive interview:

How important is Udaan for you?

I had come from Delhi and Udaan was my first film. So whatever I know about acting today — obviously in the past 10 years I have evolved as an actor — the basis is Udaan. Also, whatever I know about filmmaking today is because of Udaan. For example, while shooting I used to ask Vikram why a particular angle was taken in a scene. And Vikram would come with a paper and pen and explain everything to me. Udaan was my film school.

How did you get cast in the lead role?

It was purely by auditioning. The auditions for Udaan were on. My brother gave an audition through a coordinator and suggested I do so too, saying that auditions are going on for "some Anurag Kashyap film". I went to the casting director but they rejected me as they didn’t want someone with my looks. I was fine with it.

But after a week or two I got a call from the casting team. They said they wished to audition me, but I would have to cut my hair. At that point I sported long hair. I said I won’t cut my hair, but if I got selected, then why not? Even till this period I didn’t know if it was for a leading or a supporting role. 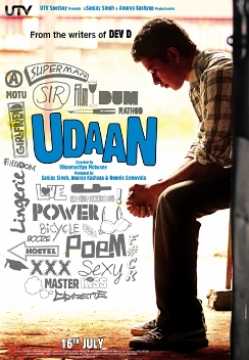 My first audition was pathetic. Vikram told me about it much later. For me, it was a very good audition. Vikram thought there was something very raw and honest about me. Then I met him for the first time. He really liked me as a person. He said my personality is very interesting but my idea of acting is a little different. He did a couple of more scenes with me. They worked with me for a few hours.

I did two scenes and that audition was far better than the first one. Then they started calling me to Anurag’s office to chill and hang out. Eventually they told me I had been selected. For me that was a process of around a month and a half to two months.

How did you prepare for the role?

I am a very spontaneous actor, which I realize now. Vikram prepared me with a lot of method acting. He gave me a lot of books and films. He gave me all the clothes and the bag and the diary I use in the film two months in advance. He wanted me to start feeling like Rohan. And I was not allowed to talk to anyone when we were shooting. I was made to feel alone all the time.

I and Ronit gelled very well. So we used to chill a lot. But then Vikram asked me not to talk too much to Ronit. He said he doesn’t want me to develop a friendship. I also had an acting and diction teacher, Vikas Kumar, in Bombay. He is a brilliant teacher who worked with me for a lot of scenes.

You had very difficult confrontational scenes with Ronit Roy where you also get hit by him a few times. How challenging was it?

To shoot such scenes on the sets was challenging. Before the shoot Vikas used to play Bhairav Singh. During one rehearsal he actually slapped me. Obviously I wasn’t expecting a real slap. I looked at him like, ‘What the fuck! Why did you slap me?’ As I was looking at him, he slapped me again. He was in full character. He looked at me as if to say, ‘What will you do?’ I started crying and got really angry. I pushed him on the bed and started punching him. After a while he asked me to calm down and said it’s fine.

That is why during the ending of the film, while we were filming the scene where I punch Ronit Roy, I punched him really by mistake. [But I punched him] so hard that he broke his nose and had to undergo surgery. Vikram and Ronit still make fun of me, saying I did that deliberately, which is obviously not true, it was an accident. But yes, I got my revenge (laughs).

The climax has a long and symbolic chase sequence between you and Ronit Roy. Both of you ran a lot. How challenging was this part?

It was very difficult. We had a lot of running scenes. In the film, Ronit takes me jogging every morning. Then there is that chase in the end. We used to shoot those scenes at 9am but I, Ronit, Vikram and the reduced crew used to reach the venue at 5 or 6am to prepare. Then the rest of the crew would come and we would shoot at 9am. The last chase was very important. We ran a lot for it.

But that was also a blessing in disguise. Earlier there was supposed to be a chase with Ronit and me together. But after a point you only see me running, which wasn’t intentional. During the early part of the chase Ronit had to catch up with me. He ran hard and tore his hamstring, so he couldn’t run much thereafter. That’s the reason we only used close-up shots of his. Luckily it worked.

What kind of offers were you getting after the release of Udaan?

Right after Udaan there were a lot of offers, but they were not interesting enough. For example, there was an offer with an A-lister, but I had to play a character which was of hardly any importance. I didn’t want to do something like that. And once Udaan became a success, there were other directors who wanted to do a father-son story. There was no substance in such offers. They were just trying to repeat the success of someone else. And for me content has always been very important.

There were a lot of films where they said my character is present in the whole film. But I was just present. I wasn’t doing anything of consequence.

Luckily, 2015 onwards the web thing started happening. That gave me a lot of scope as an actor to experiment. People were ready to invest in actors who are not big stars. So, a lot of good and experimental work started coming my way. Things have been pretty smooth since then.

Your character in Udaan used to love writing poetry. I believe you do the same in real life. Were you always into poetry or did that happen after Udaan?

It was while working on the film. Before doing the film I hadn’t written a word of poetry. During the film, Vikram gave me a diary where I started writing a bit. But for four or five years after the film was released, I didn't write much. It was only once in a while. But from 2015 onwards I started travelling a lot. I started reading a lot about spirituality. That made me very interested in myself. After that I started writing for some reason. Sometimes at 2 or 3am I think of a line and start writing. It is just random. I am not a professional writer. I do it sometimes.