Ali Fazal took three months to say I love you back to me, reveals Richa Chadha


The couple who met for the first time on the sets of Fukrey (2013), share little-known details of their love story.

Richa Chadha and Ali Fazal were all set to get married in April this year. But the COVID-19 pandemic and the subsequent lockdown prevented them from tying the knot. Although they couldn’t get married, it didn’t stop them from doing a wedding photoshoot for a lifestyle magazine.

Apart from posing for the magazine in various costumes and poses, Chadha and Ali also revealed the little-known details of their love story for the first time.

Chadha remembers the moment she spoke the three magic words to Fazal. “We were at my house watching Chaplin - the 1992 British-American biographical comedy drama starring Robert Downey Jr. I was happy to see him enjoy the movie and was grateful to have found someone with similar tastes. That is when I said, 'This is really sweet, I love you' to him. It took him three months to say I love you back to me,” she said in an official statement.

Fazal added that Chadha’s clumsiness played a part in him falling for her. “She thinks I fell in love with her only because of her clumsiness - and it surely is one of the reasons. She is as clumsy as it gets. If she is eating, there will be glasses spilling, food will be all over the place, and cutlery will definitely fall,” he said. 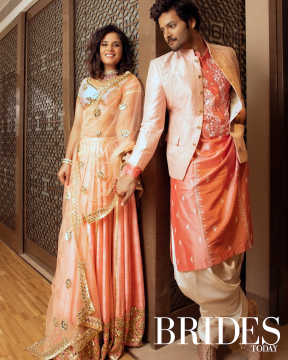 Fazal also shared one such moment which involved veteran Hollywood star Judi Dench. “Her most embarrassing clumsy moment was in Venice. It was at a fine dining event and Judi Dench was sitting at the next table. Suddenly a bean went flying over. Of course, it was from Richa’s plate. She calls it her Pretty Woman moment!” he said.

Chadha then shared the all-important moment when Fazal proposed marriage to her. “He had planned a romantic dinner on a small, secluded island in the Maldives,” she said. “I thought it was for my birthday, I didn’t suspect a thing. We had finished eating and were sipping champagne, when Ali, being his spontaneous self, asked me to marry him. He didn’t go down on his knee, nor did he have a ring, but that’s all right,” she said.

The proposal also had its after-effects on Fazal. “After that, he took a 10-minute long nap on the sand - I think it was because he may have been stressed about the proposal!” she added.

Chadha and Fazal met for the first time on the sets of their film Fukrey (2013).