Ajay Devgn: We can’t do anything about protests against historical films


Actor-producer Ajay Devgn reveals what excited him about the story of Tanaji and how he was ‘allowed’ by the MNS to dub the film in Marathi.

Generally artistes find playing real-life characters more challenging. But that wasn’t the case with Ajay Devgn in his keenly awaited film Tanhaji: The Unsung Warrior. Instead, he tells us that his bigger challenge was as a producer since they were keen on making a film that is on a par with Hollywood productions.

Directed by Om Raut, Tanhaji: The Unsung Warrior is based on the story of Maratha warrior Tanaji Malusare. This is the second time Devgn is playing a historical character after The Legend Of Bhagat Singh (2002).

In a group media interaction, Devgn spoke of what excited him about the story of Tanaji and how he was ‘allowed’ by the usually extremist Maharashtra Navnirman Sena to dub the film in Marathi. He also shared his views on the protests that have become de rigueur for almost every historical film these days. Excerpts:

What excited you with the story of Tanaji?

When I heard the script, the first thing I realized is that he was such a great character who made such a big sacrifice. Then I decided to start a series called Unsung Warriors because there are so many such warriors who have died for the country, made such big sacrifices, [they have] such great stories but have only become local heroes. Tanaji is only known in Maharashtra. Everybody knows Shivaji Maharaj, but nobody knows [Tanaji] in the North. 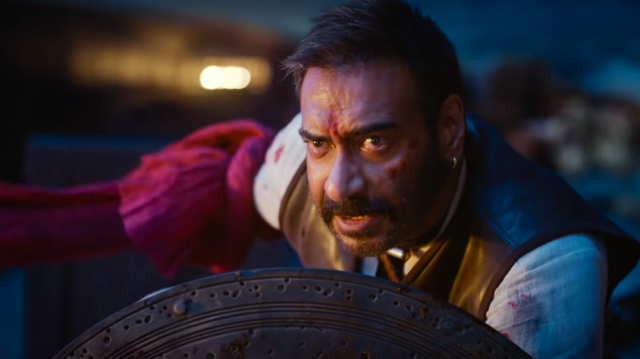 So, in this Unsung Warrior series, after this it would be somebody else from some other state who has done a lot but is not known by the entire country. When I heard the script of Tanhaji, I thought it’s a complete script. It is a good message. And we make commercial films which people like and they get drama and action. This story itself has so much that I got excited with it.

Can we say this is one of your most challenging characters?

No, I won't say that as an actor. As a film, it was. There is a lot of homework and research of four and a half years. Then we have used a lot of technology as we don’t have anything about the 16th century now. Then the kind of 3D we have done has never been done before in India. You decide whether it is better than Hollywood standard, but at least we have come on a par with that. We have created such visuals and technology.

And we have done all of this in India. We haven’t taken any outside help. It was quite a task. And we didn’t know till the end whether the film will turn out to be the same that we had imagined.

You have spoken a few lines in Marathi in Singham (2011) and Singham Returns (2015). It looks like this will continue in Tanhaji.

Have you dubbed for the Marathi version as well?

No, because it’s not the type of local Marathi that we speak. It’s the language of those times. So, it is difficult to catch that flavour.

The Maharashtra Navnirman Sena (MNS) has always opposed the practice of dubbing Hindi films in Marathi. But it made an exception for you.

Because it is such a big story. Shivaji Maharaj is god here. And there hasn’t been any film based on Tanaji. So they said you can do it in Marathi also.

You are working with Saif Ali Khan after 13 years. How was the reunion?

It was lovely. We get along very well. I wanted Saif to do a film like this because it’s a very edgy role to the gallery. It had that quirkiness which Saif already has. He is looking very nice in that attire. When the conflict takes place it should look like two mards are fighting each other.

What was behind the decision to cast Kajol as Tanaji’s wife Savitri?

When I say Tanaji sacrificed a lot, Savitri made a bigger sacrifice. Wives letting their husbands go to battle not knowing whether they will return is also a big sacrifice. And for such a performance, I didn’t think anyone else could have done better justice to the role.

Kajol had said that when you are on the set, you are 50% actor and 50% director.

In the sense that we get attached to the film so much that we give inputs on how to take a scene. We say that I thought it could be done this way, but now you see how you want to do it.

How much is fact and how much fiction in the film?

Now that is a tricky question. When you read history, they finish it in just two pages. Like, Tanaji was like this, he went for the battle, his wife let him go, he left his son’s wedding and went, etc. But we need to create scenes like how did he fight, what did he say to his wife, what incidents took place, what did he say to Shivaji Maharaj.

Has the recent debacle of Ashutosh Gowariker's historical film Panipat (2019) worried you?

Not at all. People will like or not like according to the product. I am not saying that [Panipat] was a bad film. There must be some reasons for that [film not doing well]. And the length of our film is exactly two hours. It’s a 3D film, so you can’t keep it long else you will get a headache.

In recent years there has been some protest or controversy every time a historical film is set for release.

You can’t help it. Someone or the other will protest. We can’t do anything about it. We try our best to ensure no controversies happen. Then we have to have a conversation with them and make them understand. If you read four history books, all four may have different facts. So which is right? If one person follows one and the second person follows another, they will start fighting amongst themselves.