An actor’s job is to add value to what’s on paper: Akshaye Khanna on Sab Kushal Mangal


Actor Akshaye Khanna speaks about his latest release, how he selects his projects, and why the past year has been personally satisfying.

Before the film's release, the actor spoke to Cinestaan.com about how he chooses his projects, the positive futures for newcomers Priyaank Sharma and Riva Kishan, and why the past year has been personally satisfying.

From the offices of One Up Entertainment, producers of Sab Kushal Mangal, Khanna began by saying of his selection process, “It’s like when your grandmother tells you a story when you are going to sleep, when you are a child, and you say, ‘Dadi, not this story, tell me that story.’ That’s how it is really. You either enjoy a story or you don’t enjoy a story.”

For his latest film, Khanna said, it was the sweetest subject he had heard of and that’s probably why it appealed to him. It struck a chord with him.

“It’s a very sweet film. It’s one of those films where you can watch it at night just before going to sleep. It just makes you happy. Sab Kushal Mangal hai, everything’s fine. Go to sleep now. Tomorrow is a new day,” he remarked.

Asked whether he would actively seek out prospective projects, Khanna referenced an interview of Anil Kapoor where the veteran actor indirectly told filmmakers that he would consider all kinds of roles.

“In a way, he’s pitching it to himself, to filmmakers, to writers, to producers, that I’m open to this kind of thing,” he recalled. “And he made a comment saying, I will play Amitabh Bachchan’s grandfather also, but give me a good role. It’s a way of speaking to your fraternity, saying that look, come with me, I’m open to it.”

He went on to say that there are many preconceived notions about him which are not necessarily true, especially about him taking up limited work. He said he is in a space now where he wants to take on more work.

“For me, I would be happiest doing three or four films a year," he said. "But that’s not always the case where I’m able to do it. So, a certain perception gets created, it happens over a period of [a few] years where you are just doing one film. Then sometimes you can reach a point where, say, you are an Aamir Khan, if I do one film in two years, nobody asks me any questions. So it depends on so many things.”

Khanna's character in Sab Kushal Mangal is a local politician named Baba Bhandari who falls for a young woman, Mandira, played by Riva.

Speaking of what nuances he brought to his role, he said, “An actor’s job is to add value to what is on paper, because you are bringing it to life. Before that it’s just something that’s written. So that’s my job. I would say the vast majority of my performances, I can say, have been mine, but they would not be what they are without my director. So it’s a bit of both.

“There have been times where I feel that my performance has been, or my work has been totally because of my director’s vision. And sometimes I feel that the performance is mine. But the direction I have been given through the course of the film has contributed a lot,” he continued.

In the past few years, Akshaye Khanna has worked with a number of first-time filmmakers, but he said the fact that they were new to the industry was least important to him.

“It doesn’t matter whether they are fresh or they are old as long as they are making a good film," he said. "And as long as their direction to you as an actor helps you, is helping a performance, that’s what matters.”

Along with a first-time filmmaker, Khanna is sharing screen space with Sharma and Riva who are both making their debut. For the new pair, the whole focus has been performance and that would help them reach across to the audience.

“The first hurdle any new actor has to cross is, has my work been accepted?” Khanna said. “Your film can do well, it can bomb, [or] it can do really badly. For example, my first film [Himalay Putra (1997)], it bombed at the box office, but I was an accepted face. That’s very important for Priyaank and Riva. I have a very strong feeling that they will overcome that hurdle.” 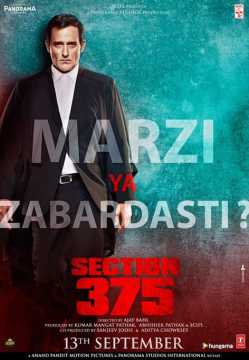 Khanna said he was proud of his two 2019 films even though they did average business at the box office. “I don’t mean to sound clichéd or predictable, but between The Accidental Prime Minister and Section 375, it’s really been a satisfying year as a performer.”

In Ajay Bahl's Section 375, Khanna played criminal lawyer Tarun Saluja who defends a filmmaker accused of rape. While the film opened up the conversation about sexual harassment at the workplace, Khanna said he never thought of making a film just so that people would talk about a particular topic.

“People have come to me and said they enjoyed the film,” he said. “[They] said I wish it was this way and I wish the ending was not that and I wish it was slightly different. So you have a variety of different perspectives, that’s part and parcel [of making a film], but I mean, if at all a film or a novel or a song or any piece of art, if it provokes thought or a perspective, that is something that as an individual, or as a society, we haven’t given enough importance to, or enough credence to, or it has been ignored and it gets a little push, it’s always a positive thing. But that’s never the intention to make a film. The intention is always to entertain.”

Sab Kushal Mangal is now playing in theatres; Khanna is yet to announce his next project.