Everyone should do theatre at some point in their life: Chandan Roy Sanyal


Versatile film and theatre actor Chandan Roy Sanyal talks about his artistic philosophies and explains why nothing worries him now.

Actor Chandan Roy Sanyal is known for his work in both Hindi and Bengali cinema as well as for his theatre performances. In a movie career of around 15 years, Sanyal has appeared in films that have brought him critical recognition and added to his portfolio as an artiste with a fluid movement on different performing arts platforms. The actor has recently worked in several web-series and is also working on his own directorial venture.

On his fortieth birthday (Chandan Roy Sanyal was born on 30 January 1980), the multifaceted actor discussed his philosophies as an artiste in an interview with Cinestaan.com. He also shared how he has matured over years as a professional while at the same time learning to take life as it comes instead of investing too much in building a professional graph. Excerpts:

What are your thoughts on your birthday precisely?

Nothing special! People are hardly aware of my age. Those who meet me consider me to be a teenager. I don’t think there is an age bar to determine our success. I have no such protocol. I just go with the flow.

There was a time when I used to worry about my career a lot. I would try to follow certain thoughts to shape my career and while choosing films. But now, I think, with acquired wisdom, I tend to look at things in a different way. Now I look forward to each day and nothing as such worries me.

How do you connect your personal experiences while enacting a character?

See, it is not necessary to be a great human being to be a great actor, but somehow it augurs well for me. I think it is necessary to be observant and connect with people in day-to-day life, besides connecting with the audience. If one uses those experiences of interactions with people while enacting [a character], one can present the truth because it is not possible to fake an emotion. Thus, it also becomes easy to connect with the audience.

Sometimes, we are not in the position of entertaining our friends and family, but I try my best to be great with people and charm them because I believe in Karma and energy.

Do you choose your script or the character you are going to play on the basis of that?

I choose my script depending on the director’s vision of how it will come out. I go through the character and see how I can make a contribution through my part. Also, I try to choose characters which I have not done already and try to challenge myself with a new avatar.

We don’t see you on screen very regularly. What do you do in between your film projects?

I read, write, make my films, travel and cook when I am not doing a film project. Acting in films is not the end of the world for me. The great English and American stage actors often like to disappear and start with fresh energy and gusto. We can’t be doing the same things over and over again and repeat ourselves. That’s what my guru Habib Tanvir told me. He told me to keep it fresh. Hence, I keep taking breaks now and then.

This year marks the 20th year of your journey as a theatre personality. What are your thoughts on that?

As an artiste or an actor, I consider theatre to be a boon for me. I think everybody should do theatre at some point in their life, at school or college [at least]. Theatre is not just about acting; it is a way of life, a religion. It teaches you how to live in a certain way and respect people.

Just to read a play and bring it on to the stage changes life. It doesn’t matter how great the play is. Even if you are staging it in a school, a housing society or an office, the effort you put in is very honest and genuine. It gives some seeds of leading a good life.

I did not start doing theatre because I wanted to be famous. When I was growing up, as a teenager I had a lot of questions regarding life, its disparities and myself. I could find the answers while doing theatre, reading books and learning about the journey of playwrights and actors. You can do theatre at any age. If you do it at 60, you will realize the things that you missed out in life and improve them.

Your film Urojahaj (2019) was critically appreciated but not widely promoted in Bengal. Also, the film had nominations in the categories of Best Director and Best Film, but not for Best Actor. What are your thoughts on this? 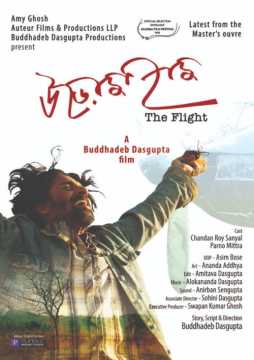 The market economics is such that people tend to put more money on films which have mass appeal. This was an arthouse film and Buddhadeb Dasgupta is known for such filmmaking. These are the films which might not have run successfully in theatres, but, at the same time, these films go into libraries and people scout and discover them. When I was young, I [too] was only watching Hindi films and some of the famous Bengali films. These kinds of films [like Urojahaj] add to the artistic profile and I wish more people would make such films.

Awards and nominations don’t go well with me. In my entire career, spanning 10 years, I never got nominated for or won an award except for one for Urojahaj at the New York Film Festival.

Who are the directors you have really enjoyed working with so far?

I have learnt a lot from Buddha-da [Buddhadeb Dasgupta]. I also learnt a lot from Vishal Bhardwaj, though I did just one film with him. I keep sharing my work with him and discuss with him when I make my short films. I enjoyed working with Subhash Ghai. I got to know great stories of his journey as a director and his struggles as a writer and a producer. Aniruddha Roy Chowdhury is a great friend and I always go for advice to Laal-Da [Suman Mukhopadhyay].

This 26th January marked the 14th year of your first film Rang De Basanti (2006), which has achieved cult status now and is also being discussed in the light of the protests [against the Citizenship Amendment Act] that are going on throughout the country. What are your thoughts?

When Rang De Basanti was made, the current scenario was hardly foreseen. Right now, protests are going on not only around the country but across the world. Rang De Basanti also had elements of violence in it, which I don’t think is justified. That’s a film. We should keep in mind the contributions of Gandhiji, Nehru and Ambedkar, and respect the spirit of democracy and never resort to violence. We all belong to the same country. We might have differences of opinion, but we should not shout each other down. There should be an environment of dialogue and debate.

Can you talk about the projects you are currently working in?

The series bug has bitten me now. Last year I didn’t do any film. I started doing series with Hawa Badle Hassu. I have finished Ashram, a web-series by Prakash Jha, featuring Bobby Deol. I did a bilingual series Kali, with Paoli Dam. I performed a physically handicapped gangster in it, doing the entire act on a wheelchair. I am quite excited about this — I think it would be interesting to watch.

I have also done a Bengali film, Rawkto Roawhoshyo (2020) by Soukarya Ghosal, with Koel Mallick. Another project is Deep 6, by Madhuja Mukherjee. It has been shot and produced by Avik Mukhopadhyay. The film will come out this year. I am also making one feature film, but it is too early to talk about it.