At the event, actor Ranveer Singh introduced his cast of Kapil's Devils, who play the cricketers who brought the 1983 World Cup home.

After unveiling the character posters of almost each player of Kabir Khan's upcoming 83 (2020), the first look of almost all the actors, minus Ammy Virk, assembled in Chennai this evening to launch the film.

Besides Hindi, the film will also be released in Tamil and Telugu. It was announced on 23 January that Nagarjuna and Kamal Haasan would present the sports film in Telugu and Tamil respectively.

But today, it was all about Kapil's Devils, led by actor Ranveer Singh who plays the captain and all-rounder Kapil Dev, who led the Indian cricket team to its first World Cup in England. The actor called his teammates and fellow actors one by one on stage to introduce them in order of the batting lineup. Only Ammy Virk was not present; he was shooting for a music video. 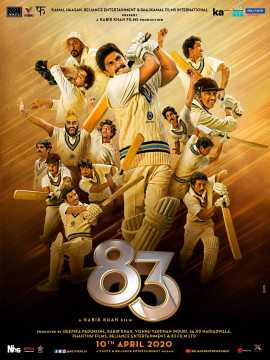 The first look poster of the film also shows the whole team together in action, with Singh's Kapil Dev front and centre as their fearless leader.

This event is the first of many that the film will hold introducing audiences to the players and the actors who will be a part of recreating the famous 1983 victory. 83, which also stars Deepika Padukone as Romi Dev, Kapil's wife, is due to be released on 10 April 2020.