6 factors that made Deewaar a timeless classic


On the 45th anniversary of the release of the cult classic produced by Gulshan Rai and directed by Yash Chopra, a look at what made the gangster drama so iconic.

There is a scene in Deewaar (1975) in which Vijay, the shoeshine boy on a pavement, refuses to pick up a coin thrown by a mobster's buddy. Seeing the urchin's attitude, the mobster (Iftekhar) remarks to his friend, "Yeh lumbi race ka ghoda hai [This boy will go far]." That seemingly ordinary remark proves prophetic: Vijay ends up becoming a mob boss himself.

But who knew then that the remark would prove prophetic about the film as well! Today, 45 years after its release on 24 January 1975, almost exactly five months before prime minister Indira Gandhi clamped the Emergency on 25 June 1975, Deewaar is considered a cult classic and remains one of the best gangster dramas in Hindi cinema.

So, on the film's 45th anniversary, we decided to try and understand what worked for Deewaar. We could find at least six major factors for the film's instant success back then (it was a platinum jubilee hit, which means it ran continuously in theatres for more than 75 weeks) as well as enduring attraction. If you can think of more, do share them with us in the Comments below.

Probably the biggest reason Deewaar is considered a cult classic is the theme the film explored. As Karl Marx said, "The history of all hitherto existing society is the history of class struggle." As long as the gap between the haves and the have-nots exists, there will always be a group of people who will rebel against the system which works to aid those who are well off as against those who are struggling to survive.

Deewaar captured this Marxist sentiment perfectly. The third decade of Independence was drawing to a close and the realization was dawning upon people that India had not achieved all that they had hoped and dreamt for on 15 August 1947. Feudalism had ended, but only to be replaced by a new system of exploitation that helped rich industrialists to reap the benefits while the poor again found themselves consigned to the margins.

The film's opening sequence, which shows Vijay's union-leader father addressing his co-workers and announcing a strike to press for an increase in wages and then cuts to the company's owners nonchalantly playing snooker and listening to the speech on a tape recorder, introduces the theme of the film.

Though the same theme of the haves versus the have-nots had been explored in Hindi cinema in films like Gunga Jumna (1961) and Mother India (1957), writers Salim-Javed updated the story and moved it to an urban setting, unlike the earlier classics which were set in rural India and spoke about atrocities committed by feudalists. 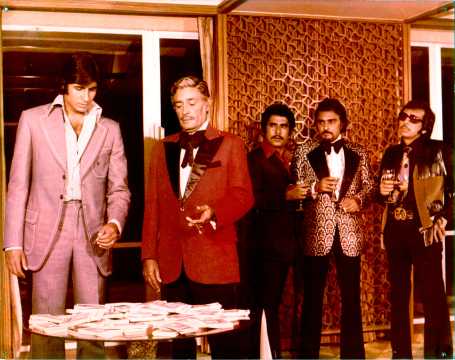 Deewaar also had a huge impact on the social and political environment of the day. There was already searing anger among the youth because of joblessness, the government's casual attitude towards the growth of organized crime in cities, and the increasingly authoritarian rule of prime minister Indira Gandhi.

Deewaar was released at a time when this anti-Establishment anger was rising to a crescendo. In the political turmoil before and during the Emergency, many people, especially the young, identified with the film's theme and with Vijay's journey on a deeper level because they felt he represented them.

Recently, screenwriter Javed Akhtar, one half of the famous Salim-Javed duo who wrote the film, admitted in an interview that for a long time he remained blissfully unaware of the sublime message and symbolism in the film. Though Salim-Javed might not have written the film in the context of what was happening at the time at the socio-political level, it captured the zeitgeist in any case and went on to become a symbol of anti-Establishmentarianism.

Hindi cinema had seen anti-heroes play the main lead before in films like Awara (1951), Baazi (1951) and Phool Aur Patthar (1966), but there was a distinct difference between these previous anti-heroes and Amitabh Bachchan's Vijay.

In Baazi, Dev Anand's Madan becomes a gambler to provide for his ill sister. In Awara, Raj Kapoor's Raj murders a man responsible for separating his parents and ends up becoming a thief to fend for himself. So these anti-heroes were forced into a life of crime by circumstances.

Bachchan's Vijay was different in that he chose to become a criminal. In fact, he was proud of his criminal endeavours. The iconic scene under the bridge where Vijay proudly declares, "Aaj mere pas buildingen hain, property hai, bank balance hai, bangla hai, gaadi hai... [Today, I own property, have a hefty bank balance, a bungalow, a car]" is a prime example of his hubris. Unlike previous anti-heroes, Vijay was unashamed of being a criminal. Yet, at the same time, his moral compass was intact.

The script of Deewaar is widely considered Salim-Javed's best. Talking about the script, director Yash Chopra once said, "As far as the script is concerned, Deewar is one of the greatest scripts I have ever read. It is better than Sholay (1975). That was the one script where you didn't have to change or delete anything."

Deewaar was in a sense the amalgamation of ideas from many previous films like Gunga-Jumna and Mother India, but Salim-Javed turned this familiar script into a gangster drama that was not only engrossing from the first scene to the last but also a harsh social commentary.

It is said that Salim-Javed wrote the film's screenplay in just 18 days and completed the bound script with dialogues in 45 days. It was an unheard-of pace in those days.

In an interview recorded many years ago, Javed Akhtar himself admitted that Deewaar remains his most satisfying film. As he pointed out, "Deewaar was true to its genre and never deviated from what it wanted to say." The brilliance of the script was such that while watching the film "you feel that there is a lot that film is not saying, but [still] conveying somehow".

Amitabh Bachchan had already delivered a blockbuster hit with Salim-Javed, Prakash Mehra's Zanjeer (1973). That film brought Bachchan the title of 'Angry Young Man', but it was Deewaar that cemented his place as undisputed superstar of Hindi cinema, a position that he held uninterrupted for a decade and a half.

Salim-Javed had immense faith in Amitabh Bachchan. They were so adamant on casting Bachchan in Vijay's role that they literally forced producer Gulshan Rai to change his decision to cast the romantic hero Rajesh Khanna. Khanna, the first superstar of Hindi cinema, was still India's biggest star at the time and it was a huge gamble to try and change the decision to cast him, but the risk paid off.

When the screenwriting duo went to Yash Chopra to urge him to cast Bachchan in Vijay's role, the filmmaker remarked, "Does Amitabh pay you a commission that you want him in all your films?"

But Chopra eventually acquiesced and Deewaar catapulted Bachchan to stratospheric heights, making him the man who ruled the Hindi box office till the end of the 1980s. And it remains one of his biggest hits.

Bachchan embodied Vijay. Even more than in Zanjeer, this was a perfectly calibrated performance. Except for a few outbursts, Bachchan internalized Vijay's anger and conveyed his contempt for the society that had wronged him and his family with a cold stare.

The scene in the temple where he argues with god is still considered one of the best written scenes in Hindi cinema. Bachchan, however, took that scene to new heights with his immaculate performance.

The screenwriters and superstar continued to collaborate on several superhit films in the decade, including Sholay, Trishul (1978), Don (1978) and Kaala Patthar (1979). 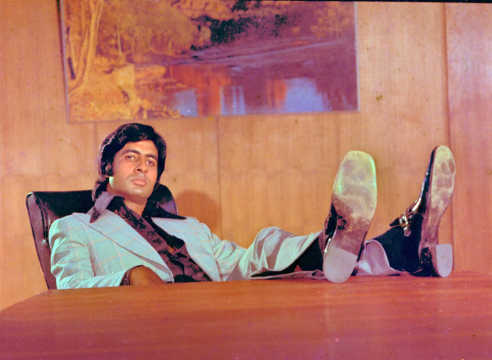 In the past half a decade, Hindi cine lovers have got used to strong female characters. But it was a rarity back in the 1970s to find strong women in cinema.

Nirupa Roy embodied the mother who is torn between her two sons, one who has gained immense wealth by adopting wrong means and another who has stuck to the straight and narrow at great personal cost. Such was the impact of her performance that she was repeatedly cast as Bachchan's mother in films like Amar Akbar Anthony (1977), Mard (1985) and Lal Baadshah (1999).

The mother who chose to stand by her principles even at the cost of losing her son, like Nargis in Mother India, is still remembered as Hindi cinema's most iconic mother.

At the same time, Parveen Babi's Anita was unlike any heroine the Hindi film audience had seen till then. Casually approaching men, flirting openly in a bar with cigarette in one hand and drink in the other, Anita was unabashed about seeking premarital sex and enjoying life to the fullest. She had all the qualities that were till then reserved for vamps, and yet the audience felt for her, such was the impact of Salim-Javed's writing and Parveen Babi's performance. 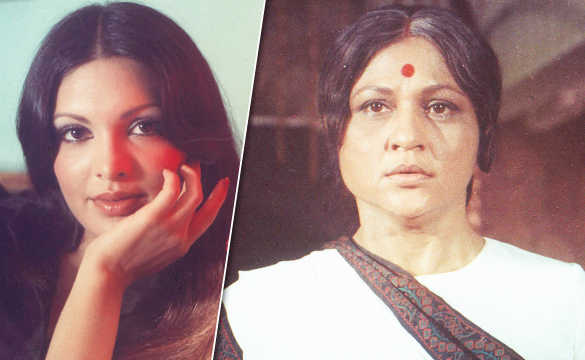 It is difficult to fathom how the late Yash Chopra, who is best remembered today for romantic sagas, directed this hard-hitting gangster social drama. Though Chopra had made films on serious social issues before, like Dhool Ka Phool (1959) and Dharmputra (1961), it was the first time he was handling a gangster story and he came out with flying colours.

The film had only one action scene, but it is still termed an action drama, such was the impact of that one scene. There is violence in the film, but it is more suggested than explicit. Though the film received average ratings from critics at the time of its release, it went on to do tremendous business at the box office, running in theatres for almost three years.

Deewaar also swept the awards that year, getting nominated for nine and winning seven Filmfare trophies.

The film was such a gigantic success and had such huge cultural impact that it was remade in Telugu, Tamil and Malayalam. The Telugu version, titled Magadu and starring NT Rama Rao, was released in 1976. That film also became a box-office hit.

The Tamil version was released in 1981 and starred Rajinikant in the lead role. But the most surprising remake was in Cantonese in 1979. Titled The Brothers, it starred Tony Liu, the reigning superstar of Hong Kong cinema, in Amitabh Bachchan's role. That film was also a big hit.

If one has to find mistakes in this near perfect film, it would have to be the forced insertion of songs. Though all the songs were hits and had an earworm quality to them, the fact remains that they hampered the film's pace. But those were the days when songless films were rarer than oxygen in the upper reaches of the atmosphere at least in mainstream Hindi cinema. Javed Akhtar admitted that he and Salim Khan had never wanted songs in the film, but producer Gulshan Rai would not hear of it and they had to give in.

It is astonishing that Deewaar and the themes it explored remain as relevant as they were 45 years ago, when the film was released. It's a matter of debate, however, whether that is an achievement of the film or our collective failure as a society.