Been waiting for two years: Rajvir Chauhan on Amazon’s The Forgotten Army


Actor Rajvir Chauhan, who plays an Indian National Army soldier in the web-series, speaks about his experiences on the upcoming show.

Slowly but surely, Indian web originals have become stronger with each passing year. The latest to hit the internet this week is Kabir Khan’s The Forgotten Army: Azaadi Ke Liye. The Amazon Prime web-series follows the journey of Subhas Chandra Bose’s Indian National Army which began its long and arduous march to Delhi from Singapore in 1943.

The ambitious period drama has a large ensemble cast led by Sunny Kaushal and Sharvari Wagh. Rajvir Chauhan, who plays one of the many INA soldiers fighting for India’s freedom, speaks about how he was cast on the show, his experiences filming the series in Thailand, and what reception he hopes the show will get.

Chauhan has previously done theatre in Mumbai with Makrand Deshpande and saw an open casting call from Mukesh Chhabra’s agency for a show back in 2017. Over 40 days, he auditioned and went through a look test for a part on the show.

Chauhan recalled the paces they were put through. “It was physical," he said. "We had to do a lot of crawling, climbing ropes, backflips, rolling and then weapons training — how to fire, how to unlock, and how to load bullets.”

Shooting began at Film City in Mumbai and later shifted to Thailand, in different places like Kanchanaburi, Chiang Mai and Bangkok, Chauhan remembered.

“It was quite exciting,” he said. “Working with a director like Khan was an amazing opportunity, and on top of that the crew was quite large. The locations were quite beautiful. When we used to shoot, there used to be almost 700 people on set. Of that, 300 were Indian and 400 were Thai locals. Our weapons came from New Zealand; they were original weapons from World War II.”

The Forgotten Army, while based on real events, is a fictional take on the struggles of the INA at the time. Before the shoot began, Chauhan said he did his homework to read up on the army’s history and its eventual journey.

A cave, the Buddha within, and the forgotten journey – Kabir Khan's The Forgotten Army memory

"[Kabir Khan] had told us there that this was his dream project. Before this, he had made a documentary which he had shot in 1999. He wanted to do this properly and that’s why it has taken so much time. There’s a lot of VFX in it,” Chauhan said. 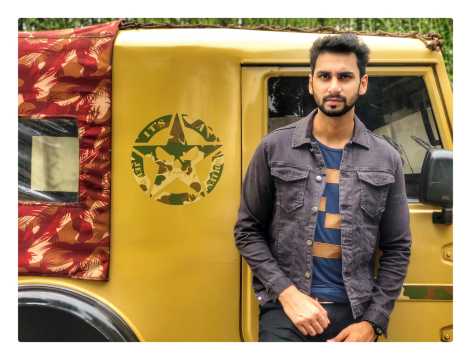 But while he and the rest of the cast were filming tense war sequences, the actor said the atmosphere on set was quite chilled out.

“As it was all real locations, there were no vanity vans or anything that could come there," he said. "It was all jungles and mountains. All of us actors and actresses used to stay there together.

"We used to have lots of discussions and fun. We used to talk about our families, Sunny [Kaushal] told us how he got into acting, while Rohit Chaudhary, who is from the National School of Drama, told us his journey. We talked about what we liked about acting and why we came into the profession.”

The action sequences, which look massive, were choreographed by Sham Kaushal and his team of around 80 people.

“They used to demonstrate what to do. It was all choreographed, you have to fall this way, the bullets will come from here and this is what you have do. They would show us first and then you would have to do it. It became easier that way,” he explained.

Even so, even with precautions, there were a few cuts and bruises as they got into the spirit of filming the war scenes. For wider scenes, the cast wore protective gear, but often when there was a closeup or a mid-shot, they sometimes had skinned knees and elbows to show for their efforts.

“It’s not just because I’m a part of it, but I think it’s going to be one of India’s best series, simply because of the production values, they are so grand. It’s on a huge level, like Game Of Thrones,” the actor gushed of the upcoming show.

It's a promise I made to Capt Lakshmi and Col Dhillon: Kabir Khan on The Forgotten Army

It has been a long wait too for Chauhan and he is keen to see how the show has shaped up since the artistes finished their part.

Right after the shooting ended, he booked himself another gruelling part in the National award-winning film, Uri: The Surgical Strike (2019). Coincidentally, the film starred Sunny Kaushal's brother, Vicky.