On Geeta Bali's 55th death anniversary, we remember her impish smile and vivaciousness that lit up the big screen in the 1950s.

Harkirat Kaur aka Geeta Bali fit rather well into the stereotype of the feisty Punjabi. Vivacious, energetic and charming, Geeta Bali hailed from a progressive Sikh family and learnt classical dance, horse riding and even the Sikh martial art of gatka.

Geeta Bali made her debut in Hindi cinema with Badnami (1946) and her first major film was Kidar Sharma’s romantic drama Sohag Raat (1948), where she starred alongside Begum Para and Bharat Bhushan, playing the vibrant Kammo, who tosses the hero over her shoulder in one scene!

Geeta Bali’s nonchalance and her mischievous eyes became her hallmark as she breathed life into even run-of-the-mill roles. She acted in a string of films, including Bari Bahen (1949), Dulari (1949) and Bawre Nain (1950), before she made her mark with her two releases in 1951 — Bhagwan Dada’s Albela and Guru Dutt’s Baazi, playing very different roles.

Playing a beautiful diva in the musical hit Albela (1951) propelled Geeta Bali to stardom. Though the film was noticed most for Bhagwan’s graceful and definitive dance movements, Bali shone in her role and the songs of the film, composed by C Ramchandra — ‘Shola Jo Bhadke’, ‘Bholi Soorat Dil Ke Khote’, ‘Dhire Se Aaja Ri Ankhiyan Mei’ and ‘Balma Bada Nadan Re’ — are hummed till today.

In Baazi (1951), Bali played the gangster’s moll with a heart of gold. The immortal song, ‘Tadbir Se Bigdi Hui Taqdeer Bana De’, is remembered for the sheer abandon with which she dances. The hero of the film, Dev Anand, once recalled how audiences flocked to the theatres repeatedly just to watch Geeta Bali in the song!

She met her husband Shammi Kapoor while working on the film Miss Coca Cola (1955) and also starred in Kidar Sharma’s Rangeen Raten (1956), where Kapoor and Mala Sinha were cast in the lead roles. Bali played a rather unusual role. 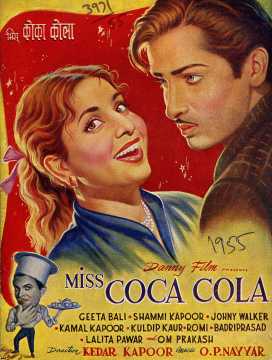 The story goes that Sharma was Bali’s mentor and so when she heard about this film, she wanted to be a part of it. But he had already signed his female lead. Bali persisted and so Sharma offered her a male role, which she agreed to play! Thus Bali plays a man, Gulu, in the film throughout. But this was typical Geeta Bali — unflinching in her desire to do different things and ready to take up a challenge with aplomb.

The film also marks the moment when Bali fell in love with Kapoor. Bali had worked alongside Shammi's elder brother Raj Kapoor in Bawre Nain (1950) and their father Prithviraj Kapoor in Anand Math (1952) and had a few doubts about their union. But Shammi Kapoor persisted and the two finally got married. It was Bali who was responsible for shaping Shammi Kapoor’s career and she indeed proved lucky for him as his career took off after their marriage.

Geeta Bali died unexpectedly of smallpox on 21 January 1965, leaving her loved ones, particularly her husband Shammi Kapoor, devastated. At the time, she was filming Ek Chadar Maili Si, based on Rajinder Singh Bedi’s eponymous novel. The film remained incomplete. Rajinder Singh Bedi's novel was finally translated on screen with a different cast in 1986 by Sukhwant Dhadda.