The film is another action thriller by Jagannadh after iSmart Shankar (2019).

Vijay Deverakonda, director Puri Jagannadh and producer Charmme Kaur at the mahurat of the film.

Arjun Reddy (2017) star Vijay Deverakonda is now all set to make his Hindi film debut in the yet untitled action thriller directed by Puri Jagannadh and produced under Karan Johar’s Dharma Productions. The movie will also be made simultaneously in all south Indian languages.

The film went on floors today after its mahurat. Although not much is known about the story of the film, the makers have termed the film as a ‘crazy project.’

This is the next film for Jagannadh after the successful Telugu movie iSmart Shankar (2019). Starring Ram Pothineni in the lead, the film was an action entertainer.

Adding about the protagonist’s character, an official statement from the makers said, “This indeed is the most challenging role for Vijay Deverakonda so far and he will be seen in a completely new avatar.” 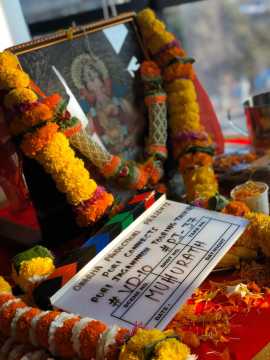 Deverakonda has been preparing for the role in various ways. “Puri took special care about Vijay Deverakonda’s look in the film. The young hero underwent rigorous training and was on strict diet to shape up his body. He flew to Thailand to learn mixed martial arts and other fight forms for his role,” added the statement from the makers.