Actress Konkana Sensharma and director Tanuja Chandra, who have collaborated for the film A Monsoon Date, shared their reactions.

Konkona Sensharma in a scene from A Monsoon Date

The Kashish Mumbai International Queer Festival has made a mark over the years as a platform to screen films that tell stories of the LGBTQ community. Now, for the first time, four of its short films will be released in theatres on 21 and 22 January in eight cities — Mumbai, Delhi, Kolkata, Bangalore, Hyderabad, Pune, Nagpur and Chandigarh.

The four shorts — A Monsoon Date, U For Usha, The Fish Curry and Ladli — will be released at various PVR outlets in these eight cities on the two dates through the medium Vkaao.

Festival founder, director and filmmaker Sridhar Rangayan said of the development: "This is a historic moment in the Indian LGBTQ movement, where Indian LGBTQ short films can be watched on the big screen as a ticketed event in PVR cinemas. We can feel the palpable excitement of filmmakers who are finding a voice to reach across to audiences. We are thankful to Vkaao along with PVR Cinemas and BookMyShow for making this dream come true. We sincerely hope audiences will fill the theatres and give this initiative a big push.” 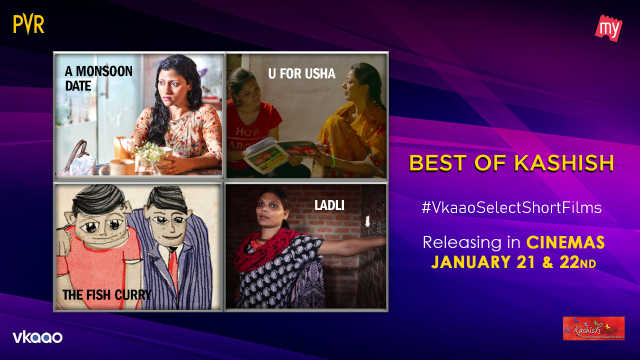 Konkona Sensharma, who plays the lead in A Monsoon Date, said in an official statement, “I am so excited that our film A Monsoon Date is releasing in theatres. This is the first time I am playing a trans-character, but this is definitely not the last.”

Highlighting the importance of telling stories related to the LGBTQ community, Sensharma added, “I think when we exclude LGBTQ from society, from our films, we tell an incomplete story of the world. That’s why platforms like this are important to share lives and experiences of a collective humanity. I hope the film and Kashish will spread love and spread pride.”

A Monsoon Date is directed by Tanuja Chandra. She, too, shared the excitement, saying, “Who would have thought this is possible for an LGBTQ film! Audiences in eight cities who would not have attended film festivals can now watch four short films and gain deeper understanding about people belonging to the LGBTQ community. Is there a bigger purpose that stories can serve or a bigger reason to make them! Fingers crossed, [may] the halls get full for those two days so that we can make more and more of these films.”