Nagarkirtan picks up eight prizes at the fourth WBFJA Awards

Kaushik Ganguly’s Nagarkirtan (2019) won in as many as eight categories at the fourth West Bengal Film Journalists’ Association Awards. The awards were given away at a glittering function in Kolkata on Sunday 12 January.

While filmmaker Srijit Mukherji kept joking whenever he was called on stage that “I did not really think I will be getting the opportunity to get on stage in a year when Nagarkirtan was released”, Ganguly's film walked away with awards for Best Film, Best Director, Best Actor in a Leading Role, Best Screenplay, Best Background Score, Best Editing, Best Makeup and Best Costume Design.

Actor-director Ganguly himself was not present to receive the award, so Riddhi Sen, who bagged the award for Best Actor in a Leading Role, spoke on his behalf. “I was part of this film from its very inception," Sen said. "The film was supposed to be made in 2015 and he [Ganguly] faced a lot of difficulties to finally get done with the film. I am happy that all his struggles are paying off now.”

Upon receiving the Best Actor award, the young star said, “I was watching the Golden Globe awards [function] recently. After receiving the Best Actor award [for his role in Joker (2019)], Joaquin Phoenix said the term ‘best’ is relative. When I am being compared with actors like Kaushik Ganguly and Ritwick Chakraborty in the same category, or if I try to look at the works of actors around the world, the term ‘best’ becomes very insignificant.”

Riddhi Sen went on to thank the association for the encouragement and said there is no end to learning. 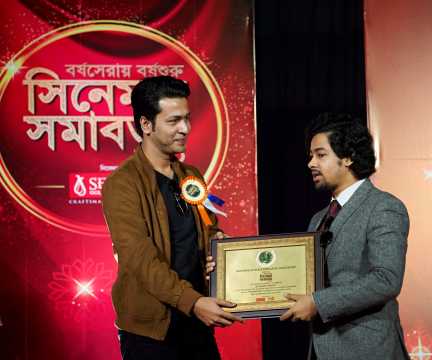 Rudranil Ghosh received the award for Best Actor in a Supporting Role for his seamless performance in Kedara (2019), music director Indraadip Dasgupta's directorial debut in which Kaushik Ganguly played the leading role.

The award for Best Actress in a Supporting Role was given jointly to Sudipta Chakraborty for her rendition of Ela in Jyeshthoputro (2019) and Lily Chakravorty for her performance in Sanjhbati (2019).

This year there were only two nominations for actors in a comic role. Anirban Bhattacharya, for the first time in his career, appeared in a comic role in Bibaho Obhijaan (2019) and won the award.

The award for Best Actor in a Negative Role went to Ritwick Chakraborty for his bone-chilling act as Adi Bose in Vinci Da (2019).

The award for Most Promising Actor (Male) was given jointly to Sayan Ghosh for Rajlokhi O Srikanto (2019) and Suprovat Das for Finally Bhalobasa (2019).

Tuhina Das received the same award in the female category for her performance as Brinda in Aparna Sen's Ghawre Bairey Aaj (2019).

The award for Most Promising Director went to Indraadip Dasgupta for Kedara. The film had picked up the Special Jury award at the National Film Awards last year. 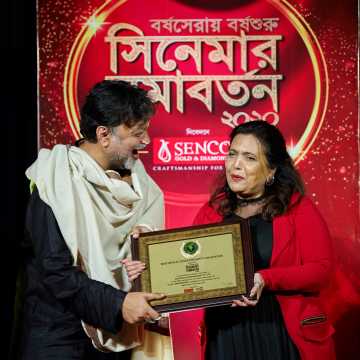 Debajyoti Mishra shared the award for Best Background Score for his work in Robibaar (2019) along with Prabuddha Banerjee for Nagarkirtan.

The award for Best Music Director went to Prasen and Anupam Roy for Shah Jahan Regency (2019). Dipangshu Acharya won the award for Best Lyricist for 'Kichhu Chaini Ami' from the same film, a remake of Pinaki Bhushan Mukherji's classic Chowringhee (1968).

Anirban Bhattacharya won the award for Best Playback Singer (Male) for the same number along with Timir Biswas, who received the award for 'Amar Bhul Hoe Gyachhe Priyo' from Rajlokhi O Srikanto.