Those who grew up in the 1990s would have many memories of actress Shilpa Shirodkar on the big screen in popular films like Kishan Kanhaiya (1990), Hum (1991), and Gopi Kishan (1994). She is now all set to make a comeback on the big screen after 20 years in the film Guns Of Banaras. Her last released film was MF Hussain’s Gaja Gamini (2000).

Speaking exclusively to Cinestaan.com, Shirodkar said, “I am so happy that my film Guns Of Banaras is finally releasing. We shot for the film in 2014 and it took a bit long to release, but it’s never too late for anything. I also believe that the best things always take time. It feels great to be back where I belong. I am hoping that this film opens doors to a bigger and better future.”

Directed by Shekkar Suri, the film also marks the comeback of actor Karan Nath after more than a decade. His last released Hindi film was Tum: A Dangerous Obsession (2004), which also starred Manisha Koirala. He is the son of producer Rakesh Nath, known as Rikku ji. He was the manager of actress Madhuri Dixit for a long time. Rakesh Nath is also the producer of Guns Of Banaras. 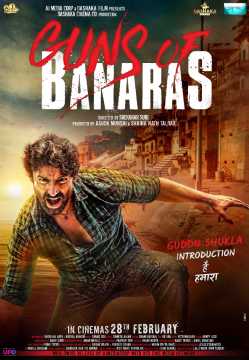 When asked about her casting, Shirodkar said that Rakesh Nath and his daughter Shiana Nath Taldar, who are producing the film, are like her family. “I had told Rikku ji that I have never ever worked in any of his home productions, so in this film, he must give me a role. So the director Shekkar, Shaina and Rikku ji together decided to give me this one amazing character,” she said.

Revealing more about her character, Shirodkar said that she plays the wife of a gangster, played by Abhimanyu Singh. But she said that she isn’t a stereotypical wife of a don. “She is very strong and believes in being matter of fact. She hates beating round the bush,” said the actress.

Shirodkar remembers giving her first shot for the big screen after years. “We shot in Banaras. My first shot was my introduction in the film,” she said.

Guns Of Banaras will be releasing on 28 February.