Vijay Sethupathi celebrates birthday on the sets of Tughlaq Durbar


As per a statement released by the makers, a surprise birthday bash was planned for Sethupathi on the sets of Tughlaq Durbar on Wednesday night.

Actor Vijay Sethupathi celebrated his 43rd birthday on the sets of his upcoming Tamil film Tughlaq Durbar (2020), its makers revealed.

As per a statement released by the makers, a surprise birthday bash was planned for Sethupathi on the sets of Tughlaq Durbar on Wednesday night.

Tughlaq Durbar, being directed by Prasad Deenadayalan, stars Aditi Rao Hydari as the leading lady. It will be her first outing with Vijay Sethupathi even though both of them worked in Mani Ratnam’s Chekka Chivantha Vaanam (2018) but didn’t have scenes together. 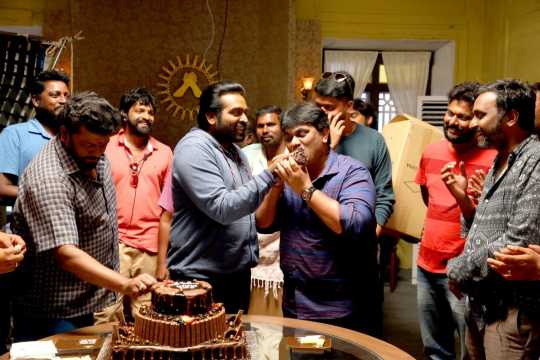 Vijay Sethupathi, who was last seen on screen in Tamil film Sanga Thamizhan (2019), is looking at having at least half a dozen releases this year. He’s currently juggling multiple projects.

This year, Vijay Sethupathi will be seen playing the antagonist in a couple of big projects. He started playing negative roles from Rajinikanth’s Petta (2019). In Vijay’s Master (2020), he’s rumoured to be playing a gangster who locks horns with the superstar.

Sethupathi will also be seen as the baddie in Allu Arjun’s next yet-untitled film with director Sukumar. Dubbed as AA 20 and to be produced by Mythri Movie Makers, Arjun’s film is expected to go on the floors in a few weeks.

Sethupathi will also be seen in Manikandan’s Kadisi Vivasayi this year. The film features him in an extended cameo but the director had said in a media interaction that Sethupathi’s role is very important from the story’s perspective.