The first posters from Sanjay Leela Bhansali's film have the director's vibrant stamp all over.

Alia Bhatt is an actress whose star status has never stopped her from trying challenging or experimental roles. The films Highway (2014) and Udta Punjab (2016) are two major examples. The latest is her character in Sanjay Leela Bhansali's Gangubai Kathiawadi (2020).

The actress plays a brothel owner in the film, which is based on a real-life story. The film is adapted from a chapter from author S Hussain Zaidi's book Mafia Queens Of Mumbai.

The two posters released from the film show Bhatt in an intense look. Although it's too early to say, it seems she perfectly fits the character of Gangubai. 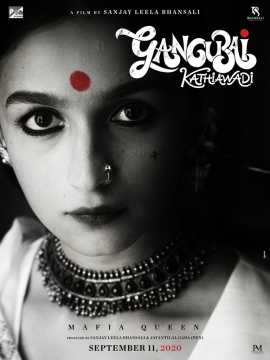 At the same time, you can't miss the display of vibrant colours that are indicative of a Bhansali film. It won't be wrong to expect another visual treat from the filmmaker, irrespective of how the film turns out.

This is the second time that a film is based on a chapter from Zaidi's book. Sanjay Gupta's Shootout At Wadala (2013) was based on a chapter on gangster Manya Surve from the author's book Dongri To Dubai. His book Black Friday was adapted fully into the film of same name by Anurag Kashyap.

Gangubai Kathiawadi will be releasing on 11 September.