Chhapaak has really affected me at a personal level: Deepika Padukone


On the eve of her birthday on 5 January, Padukone spoke about her latest film Chhapaak (2020), her debut as a producer, and how she has evolved as an actress.

Actress Deepika Padukone has begun 2020 with some brave moves. Her latest film, Chhapaak, directed by Meghna Gulzar, puts her at the centre of the story as acid-attack survivor Malti. The film is based on activist Laxmi Agarwal’s life, and Padukone spoke of how deeply she and the film’s team were affected by Agarwal's story, and what an inspiration she is for the country.

The actress spoke at a media interaction on the eve of her birthday on 5 January before she took the stand to support the students of Jawarharlal Nehru University (JNU) in New Delhi.

Over the past decade, Padukone's career has grown in leaps and bounds as she has chosen films that have displayed her strengths as an actress.

Noting the change in herself, Padukone said, “I think in the past 10 years I have learnt a lot. I have evolved and had growth. I would like that the next 10, 20 years go the same way. As a person and an actor, I always want that I will constantly grow. Otherwise, I think you kind of stagnate and then I myself will feel bored. I feel that every few months I want to see a change in myself as an actor.” 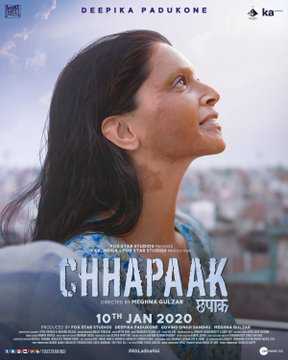 She acknowledged the criticisms she received at the beginning of her career, and took them in her stride to work on her shortcomings in a positive manner.

“Negativity and criticism are two different things,” Padukone said. “I have never entertained negativity, but I have regarded criticism, if someone has said something about my work. I have analysed it, internalized it and examined it, and thought about it, and then worked upon it.”

The actress attributed this positive mindset to her sporting career prior to becoming an actress (her father is the former badminton star Prakash Padukone and Deepika was a state-level badminton champion). Sports helped her learn how to handle success and failure, along with teaching her the values of discipline, dedication and hard work.

“I think sports played a very important part in that. When you are an athlete, your viewpoint is different. I would like that the nation’s youngsters play professional sports. You don’t necessarily have to represent the state or the country, but to play a competitive sport is very important,” she stated.

The actress then turned to speak quite passionately about the acid-attack survivors she had met in the course of the film’s making, in addition to Laxmi. Agarwal, she said, was an inspiration to them all.

“[Laxmi] is quite a confident girl, she is a very positive girl and has impacted the lives of so many other girls. And that’s why we are showing this story. I don’t think we are going to be able to change Laxmi’s life, but we can definitely change the lives of many other acid survivors,” she said.

She went on to say that these brave survivors do not expect sympathy from society, just equal treatment. “I think it’s necessary for us to understand that [for] an acid-attack survivor, their face is not a disability,” Padukone said. “They are able to do as much or more as we are able to do. The biggest problem is that we don’t know how to look into the eyes of an acid-attack survivor. We become awkward ourselves. They are not conscious of the way they look. They look at their faces every day.”

Chhapaak, she reiterated, was the most challenging film of her career so far, more so because she learnt so much about what an acid-attack survivor goes through in the aftermath.

“I hold my characters in my life, but I think none has affected me the way that I have been by playing an acid-attack survivor. You do a lot of prep and rehearsal and look tests, but eventually you need to live those final moments of being attacked by acid, to live that life, after which again, as an actor, it’s amazing. But at a personal level, it has really affected me. I don’t think I was as aware of it, the nuances of acid violence, as much as I am today,” she said.

When Padukone was lauded for taking on the character of Malti, she first thanked the writer (Atika Chohan) and the director (Meghna Gulzar) for creating Malti in the first place, and then thinking of her to play the part. It was the highest compliment for her as actress.

“For me,  professionally, call it destiny or luck that I came across a character like this,” she said. “See, I can’t do this if it was not written. The fact the writer and director, the writer specifically, whom these thoughts and ideas come from, has even thought of doing something like this, and the fact that they chose to write it in a mainstream manner, that in itself is an achievement. Then, of course, as an actor, selfishly, I am very happy that Meghna says I couldn’t think of anybody other than Deepika. When they were writing it, I came to mind.” 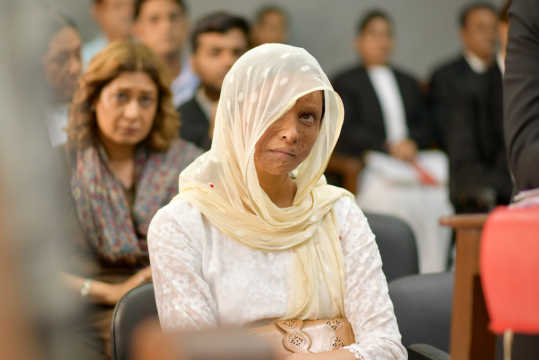 Citing her previous films like Piku (2015), Tamasha (2015), and Padmaavat (2018), Padukone felt she had chosen projects that were meaningful to her and that said something.

“I have done films where that’s where I think I am in my life right now. [You] reach a point where you want to do things that you really think are where you can bring about some kind of change and impact and influence people’s lives,” she said.

She believed in Chhapaak so much that she turned producer for the first time with the project. In her new dual roles, she had to learn to prioritize her duties on set and off it.

“It’s quite challenging also because you have to balance creativity and commercial [and] they are quite diametrically opposite. A creative person will not usually want to be involved with the numbers and the person with the numbers will not really be concerned about the creative aspect. So this is really just understanding both and understanding how they can co-exist,” she continued.