As the film completes a quarter century, filmmaker Rakesh Roshan shares some interesting information from its making, including how Ajay Devgn was earlier signed on to play the part that Salman Khan went on to essay.

The theme of rebirth or reincarnation has been working for Hindi film audiences since the black and white era. From Madhumati (1958) to Karz (1980) to Om Shaanti Om (2007), all have yielded favourable results at the box office. Another commonality among all these films was that deep down they were love stories.

But Rakesh Roshan’s Karan Arjun (1995) tried a new experiment in reincarnation films — it told the story of two brothers who return for revenge after being killed. Starring Shah Rukh Khan and Salman Khan, the film tells the story of how they are killed by the evil Thakur Durjan Singh (Amrish Puri).

Although their mother Durga Devi Singh (Rakhee) knows that Karan (Salman Khan) and Arjun (Shah Rukh Khan) are dead, she clings to the belief that they will return one day to destroy Durjan Singh and his evil men. Her wish comes true as her two sons are reborn.

The film completes 25 years today, having been released on 13 January 1995. In an exclusive conversation with Cinestaan.com, producer-director Rakesh Roshan went down memory lane and shared some interesting bits of information from the making of the film.

Explaining how his film was different from other reincarnation sagas, Rakesh Roshan said, “Rebirth has been shown in love stories but never as a story of two brothers,” he said. “I thought if it works in a love story, let me make this in a mother-and-sons story. Like both sons get killed, but the mother believes they will return and they do. The line, ‘Mere Karan Arjun aayenge [My Karan and Arjun will return]’, is the anchor of the film and that worked.”

The film also starred Kajol opposite Shah Rukh and Mamta Kulkarni opposite Salman. Rakesh Roshan said Rakhee was the first and obvious choice to play the role of a mother in those days. 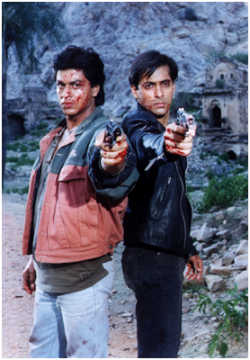 Explaining the importance of the mother, the director said, “She is just waiting for her sons to return. It doesn’t matter if they come from Mars, Jupiter or the moon. But if they just return, it is going to work. This was my thought.”

Surprisingly, most of the film’s crew and team weren’t convinced about the story. “Whenever I narrated the story to my actors and technicians they all used to say, don’t make it, it’s not going to connect. I was the only person who was confident. I felt this will work. Sometimes faith works a lot,” he said.

Recalling some amusing incidents, the director added, “Shah Rukh till the end did not understand. Although he acted in the whole film, he said, ‘Rakeshji, you tell me what to do and I will do it, but I am not convinced with this.’ Rakhee was also not convinced. Amrish Puri was a good friend of mine, so he said I will do what you ask me to. Most of the people around me weren’t convinced with the story.”

There was only one other person who had the same faith in the subject as Rakesh Roshan. “Salman was the only one who was convinced,” said the filmmaker.

The first trial of the film at Rajkamal Studio, Parel, was attended by Salman Khan's father, the veteran screenwriter Salim Khan. “After two reels, Salman came and hugged me and said you have made a superhit film. Salim Khan said you don’t know what you have made, it’s going to be a big hit. I said I have no idea, but thank you so much for saying such good words as this means a lot to me,” recalled Rakesh Roshan.

As the film progressed, the rest of the cast and crew realized that this was a “hair-raising subject”, as the director put it.

Not many may know that actor Ajay Devgn was earlier signed on to play the character that Salman Khan eventually played. One fine day, Shah Rukh Khan and Devgn told Rakesh Roshan that they had decided to exchange roles. The director was aghast. “I said I can’t go against their images. Ajay was an action hero and Shah Rukh was a romantic guy,” he said. “But they were a little adamant and [eventually] Ajay Devgn left the film. Then I went to Salman. He liked the role and we made the film.”

Social-media regulars would know that Karan-Arjun memes are a big hit today. The filmmaker is also aware of this. “I am not on Facebook but on Twitter I see [the memes] sometimes," he said. "You feel good about it because it was something created by you and people are using those lines. So it feels good that people still remember, which is a great achievement.”