The veteran actor admitted he only learnt about the festival because a short film in which he plays one of the protagonists was being screened there.

Mukherjee said he wasn’t aware that a film festival for independent films was being organized in Kolkata for the past three years. “This time I got to know about it because Knock Knock Knock, a film in which I have enacted one of the protagonists, was screened here. I got to know about the list of films from various parts of India and other countries that are being shown here. Some of them are really good films. I can see the audiences who are regularly participating coming out of the hall and discussing them,” said the actor. 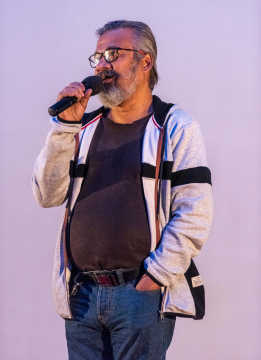 Mukherjee said the festival has not received enough publicity through the mainstream media and social media. “I sincerely hope the festival receives more recognition. I would like to express my gratitude for the organizers as well as the owner of Basusree cinema hall for taking the initiative. Next year, I will definitely make sure to participate in the festival from the beginning,” said the actor who is regularly seen in different avatars in mainstream Bengali films.

Sharing his experience of working with young director Saria, Mukherjee said, “Sudhansu works in an absolutely opposite format to what I have been working in for so many years. He studied at Ithaca College, New York, and his ways of working on the floor are quite Westernized. I had to adjust to his demands and I have learnt quite a lot from him. I have tried my best and he knows it better how much I have been able to deliver.” The actor seemed ecstatic that the short film was finally screened in his home city yesterday.