Really look up to Akshaye Khanna as an actor, says newcomer Priyaank Sharma


Priyaank Sharma, who is making his debut in this week’s release Sab Kushal Mangal, speaks about his upcoming film, creating his character Pappu Mishra, and working with co-star Akshaye Khanna.

For his first film, Sab Kushal Mangal (2020), newcomer Priyaank Sharma said feelings of excitement and nervousness had merged inside him to become one massive emotion. It was understandable that he was feeling both. Sharma has grown up in the industry; his father is producer Pradeep Sharma and mother is yesteryear star Padmini Kolhapure.

Therefore, according to Priyaank Sharma, it was an “organic, natural process” that led him to become an actor. “I was always inclined towards the entertainment space since I was a child, and then just did dramatics, did a couple of workshops, went to [The Lee Strasberg Theatre and Film Institute], came back and assisted Rajkumar Santoshi sir on Phata Poster Nikhla Hero (2013). And I did one year of scripting with him as well,” the young actor said.

Sitting in the offices of One Up Entertainment, the producers of his debut film, Sharma shared in an interview how he selected Sab Kushal Mangal to be his first film, how he shaped his character with director Karan Kashyap, and what advice his cousins Shraddha and Siddhant Kapoor gave him.

Initially, another action film was going to be Sharma’s debut. But when he was called in by the casting director for a narration on Sab Kushal Mangal, he and his family instantly laughed and loved the world of the film.

“I was actually training for that film, for the action film,” he said. “I did three months of MMA [mixed martial arts] and I became big, and then I got another romantic film that I was thinking about as well and then as soon as this came, I knew instinctively.”

Another incentive was a chance to work with actor Akshaye Khanna. “I’m a great fan of Akshaye sir and the work he has done, and if not to have 80 scenes in the film, I have 60 scenes. Just that whole camaraderie of the characters was something very great for me,” Sharma added.

Actress Riva Kishan, daughter of Ravi Kishan, is also making her debut with Sharma in the film. Working with a cast that included Khanna, Satish Kaushik, Supriya Pathak, Ananya Khare, Jaya Ojha, Mrunal Jain and Ishtiyak Khan, Sharma felt he would be intimidated being the lone newcomer on set. 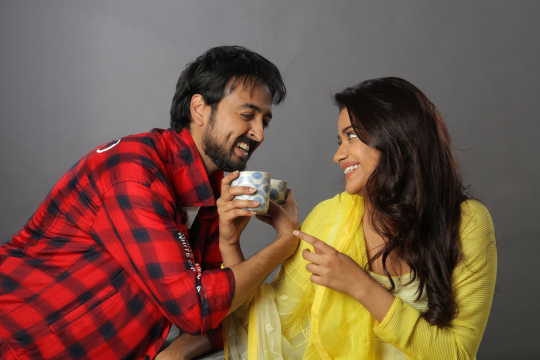 “We have been in the same boat,” he said of sharing the experience with Riva. “We both supported each other. I would say it helped. We are part of the same process. It was very comfortable with her, because we were kind of in the same mindset, approaching the character or kind of learning what we have learnt with the director and our workshops.”

With Khanna, his working equation was different. The first day he shot with him, he got nervous, even after working for 10 hours before. The older actor helped him rehearse the dialogues and get ready for the shot.

“I am very fortunate and grateful to him that he made me feel at ease and supported and guided me a lot. When I was part of his inner circle, I think it really benefited me and helped me to achieve what I have, because I really look up to him as an actor,” Sharma explained.

The upcoming film finds Sharma’s character, Pappu Mishra, in a love triangle with Riva Kishan’s Mandira Shukla and Akshaye Khanna’s Baba Bhandari. Mishra is a sensational television reporter who catches the notice of his rival Bhandari.

When asked about his preparation for the role, Sharma replied, “For me, I wanted references, so I did see Arnab Goswami sir, I saw Sansani Khez on Zee and all that. As soon as the script came to me, I was like, I’m going to go home and rehearse this. I’m going to shoot it and I’m going to show it to [director Karan Kashyap] sir. He said, keep this, don’t do this, all that minuses and addition was going on.”

He narrated another incident when Kashyap asked him to get into character. The director instructed his young actor to keep his collar up and go out and about, even for professional meetings. Sharma was unsure but stuck with the notes given for his character.

“Now, it obviously made me feel uncomfortable because if you are at a professional meeting, you don’t want to give that vibe [that] you don’t take it seriously,” he recalled. “But all these things, exercises helped me, and we worked on nuances and habits, and shockingly I would like to share is when I went on set, Karan sir said put your collar down. My first day... I said huh? He said, ‘No, dimag ka collar upar kar ke rakh, aur yeh collar neeche kar.’ So I understand where he came from.”

Sharma added that he completely relied on the director’s guidance for the film. It helped that they all planned it out before at a workshop, so nothing was unfamiliar on set. That didn’t mean there was no room for improvisation though.

All of Kashyap’s notes to train Sharma and Riva proved helpful to both. Though the film is Kashyap's directorial debut, Sharma explained that he had previously been associate director on several big films. “He didn’t really have to go out and get a teacher for me, because he himself has been one in his earlier days,” he said.

In his acting journey, his famous relatives shared some helpful advice as well. While his actress mother told him to have fun and be spontaneous and natural, cousins Siddhant and Shraddha Kapoor, also in the business, gave him some valuable tips.

“We are actually very close-knit,” Sharma said. “But we kind of stay in the same house so I have never really felt that I don’t have a real brother and sister. We talk to each other about basically everything. They are very protective with me and very happy that I signed this film, so they also just said, listen to everyone. A lot of people are going to give you gyan [knowledge], but listen to yourself, listen to your heart. Whatever you think is right, go ahead. You have to find your own journey is what they believed in.”