The actor states he is glad he isn't playing another gangster in an underworld film.

Sanjay Gupta’s next Mumbai Saga (2020) has an ensemble cast which features John Abraham, Suniel Shetty, Gulshan Grover, Prateik Babbar, Rohit Roy, Mahesh Manjrekar and Amole Gupte. Last month, the makers revealed the look of John Abraham from the film. Now it’s the turn of Emraan Hashmi, who plays a police officer who is an encounter specialist, as per a press release sent by the makers.

In one of the stills released by the makers, Hashmi is wielding a gun in uniform with a determined expression. The second sees him seated in a police car wearing sunglasses. His expression indicates that he is either angry or irritated at something. 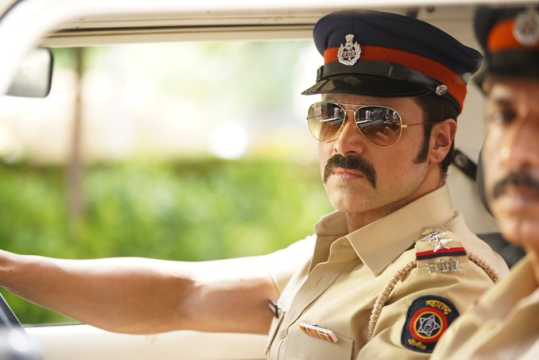 Speaking about his casting in the film, Hashmi said that he was surprised when Gupta approached him to play a cop in a gangster film. “I rejected a lot of offers which were in the same zone as Shoaib Khan from Once Upon A Time In Mumbaai (2010). Maybe I was waiting for Sanjay’s film. But when Sanjay said he is offering me the role of a cop, I was a little taken aback,” he said in an official statement.

Hashmi also said that his character is more like a gangster, although he is playing a cop. He was glad that it wasn’t the kind of a character he has played before. “I was hoping it’s not that, and to my surprise, the way the part has been penned and the kind of character I play, he is almost like a gangster. [As] an encounter specialist, he can put a bullet into someone if it accomplishes his motive. He is a badass character in a dog-eats-dog kind of world wherein this guy is the wolf,” he added.

Adding more light to his character, Hashmi shared, “Be it by fair or unfair means, he will bring down the guy he is going for. So, it’s kind of home turf, but it’s a very entertaining pitch for a character in a pure Sanjay Gupta style, who has created his own brand of cinema. And as an actor, I am always up for doing something different.”

Mumbai Saga is due to be released on 19 June.