Would not trade my political beliefs for my film career, says Saayoni Ghosh


The actress said society would have been a far better place if poets had been given more importance than politicians.

Popular Bengali movie actress Saayoni Ghosh declared that she would be willing to give up her film career but not her political beliefs or her right to dissent.

Speaking at a panel discussion on the importance of books in society at the 44th annual Kolkata International Book Fair yesterday, Ghosh, who took part recently in rallies against the discriminatory Citizenship Amendment Act and the controversial National Population Register and National Register of Citizenship, said, "I would like to make it clear to all of you that if I am threatened with not getting films for raising my voice, I wouldn’t mind leaving the industry, but I will stay firm on my political stand.”

She was speaking about whether criticizing the government and creating a voice of dissent is costing artistes their careers. “Artistes from all fields these days are considered to not have a political voice or opinion," she said, "as if we are only supposed to do our jobs blindly. But now we can see a change in the scenario. Not only artistes, but also people from every other field are speaking up." 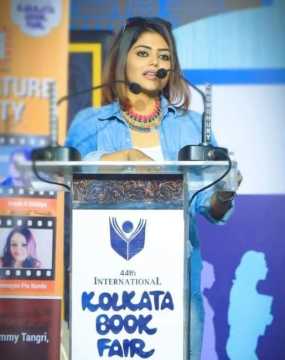 Ghosh, a former student of comparative literature at Jadavpur University, was among a host of speakers at the session on the importance of books at the world's largest non-trade book fair. The other speakers were actress Swara Bhasker, filmmaker Arnab Middya, journalist and author Sreemoyee Piu Kundu and Friends FM radio chief Jimmy Tangree.

Though the panel discussion was also about sharing the artistes’ journeys in their respective fields, Ghosh said, “I think we are here for the greater purpose of exchanging ideas and discussing what we stand for and what we don’t support. I think that’s how people will come out and make a difference.

“Today I feel worried, when we sit here and talk about issues, there is a historian who gets heckled and detained on the streets for participating in a protest. A professor in Benares Hindu University faces a boycott for his religion. At the same time, I am glad that Adamas University has arranged this programme and called us together on a single platform because, at this juncture, we need a platform to talk about issues which can make a difference.”

Dwelling on the significance of literature, literacy, the media and dissent, she said, “Before speaking on literature, which is a hard-core subject and requires deeper understanding, we should begin with literacy. We need to work towards it as I believe we have gone further back in recent times and hence regressive ideas are spreading like wildfire. We should have been in a position where we wouldn’t have needed to separately host shows on creating awareness for literature.”

She got a round of applause for saying society would have been a better place if poets had been given more importance than politicians. If poets represent a dream and politicians the reality, Ghosh said she would prefer to wake up to a dream than to bitter reality.

She also said the environment for focusing on literature is getting disturbed as students are now compelled to hit the streets to protest against several policies of the government that threaten the essence of the country and its Constitution.

At the same time, Ghosh, known for her performances in films like Natobor Not Out (2010), Golpo Holeo Shotti (2014) and Jojo (2018), said the current generation has been conditioned to remain satisfied with information instead of knowledge and updates rather than education.

She also dwelt on how the media’s role has morphed. “The media was supposed to bridge the gaps among people and give us a fair and honest narrative of what is happening around. But media is now subservient to the people in power and it is sad how people who have a voice are not contributing to positive changes in society,” she remarked, adding that society is drifting further away from truth. “The more it drifts from truth, the more it is going to hate those who speak the truth,” she said.