Wanted to break out of my 'serious' image, says Mahie Gill on signing Doordarshan


Doordarshan is the story of a family that tries to recreate the era of the 1990s in today's time for its matriarch who wakes up from a 20-year coma.

Mahie Gill began her cinema career with Hawayein (2003), a film based on the genocide of Sikhs in November 1984. With her very first film, Gill dropped a hint about the offbeat choices she would make. True to her promise, she followed up with films like Gulaal (2009), DevD (2009), Saheb Biwi Aur Gangster (2011) and Paan Singh Tomar (2012).

Gill has won many awards and received critical acclaim for her performances in these films, besides making a name for herself with her bold, offbeat choice of roles. But in her 17 years as a movie actress, she had never done a comedy.

That is about to change with the release of Doordarshan (2020) later this week, a comical drama about a family that tries to recreate the era of the late 1980s in today’s time when its matriarch awakes from a 20-year coma. 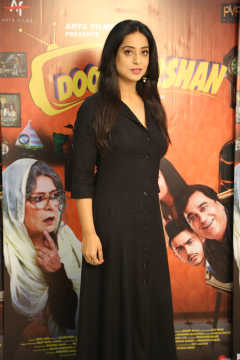 Gill confessed she was a little nervous but also excited before the start of the shoot as this is her first comedy film. "I have been doing only serious roles till now and this is the first time I am trying comedy," she told Cinestaan.com in an exclusive chat. "I was a bit nervous, but we had a nice, easy-going atmosphere on the set which helped to ease the tension."

The actress said she was keen "to break out of my image and this was a great opportunity. Everyone was supportive, especially Manuji [co-star Manu Rishi Chadha] and Dollyji [Dolly Ahluwalia]. They are both experienced actors and have worked in a number of comedy films. It was an unforgettable experience for me.”

It is a commonly held belief among actors that comedy is the toughest genre and Mahie Gill now agrees. "It's true," she said. "You can’t just go in and act. Many other factors should fall in the right place, like your equation with your co-actors. Unlike other genres, in comedy, you are more dependent on your co-actors because it's about action and reaction."

But Doordarshan, she clarified, "is not an out-and-out comedy. It's more of situational comedy where one incident leads to another and naturally creates room for comedy."

Gill said she was "a little stressed" in the beginning about whether she would be able to do justice to the role, but after a few days she got a grip on her character and performing the role became easier. "Also, our director Gagan Puri was very patient," she said. "He has also written the script, so he was very clear what he wanted from all the actors. We never felt that this is his first film as director. I am super happy to have got an opportunity to work in this film."

About working with co-star Chadha, Gill said, "It was a great experience. Though we had met a few times I had never got a chance to work with him. He is such a naturally gifted actor and writer. He would help me sometimes during a scene. If he thought I could try something different, he would advise me. We developed good chemistry during the shoot. In fact, every actor was supportive of the others and I think this will be reflected on screen."

Gill also reminisced about growing up watching serials on Doordarshan, the government-owned television network. “When I was a child, there was only Doordarshan and we all used to sit in front of a TV to watch our favourite serials," she recalled. "Everybody in the family had their own favourite serials, but the serials everyone used to watch together were Ramayan (1987) and Mahabharat (1988). I also used to love Malgudi Days (1987), Vikram Aur Betal (1988) and Dekh Bhai Dekh (1993). Nowadays we all sit alone and watch our favourite serials on mobile, so the experience of family members sitting together to watch a serial or film is becoming rare."