Book review: Sridevi – The Eternal Screen Goddess is a deep dive into the late actress’s career

Sridevi, who began working at age four, became an inimitable presence on the screen until her retirement from the medium in 1997. She made a welcome comeback in 2012 with Gauri Shinde’s English Vinglish and looked to be on the verge of signing more roles after Mom (2017). After her sudden death on 24 February 2018, attention was refocused on her extraordinary career.

The biography, Sridevi: The Eternal Screen Goddess, by author Satyarth Nayak follows her meteoric rise in Indian cinema. The book is a non-fiction debut for Nayak who has previously written the thriller, The Emperor's Riddles. Starting with the Tamil film Kandan Karunai (1967) as a child artiste, Sridevi eventually worked in the Tamil, Telugu, Kannada, Malayalam and Hindi film industries. She became a national star the likes of which India had seldom seen.

Dubbed the ‘female Bachchan’, Sridevi was the highest paid actress in Hindi cinema during the 1990s. Nayak painstakingly graphs her stardom in the South as she graduates from child artiste to lead actress, working with actors much older than her. For fans not familiar with Sridevi's work in the South, the book gives a thorough listing of the remarkable roles she portrayed before she arrived in Hindi cinema.

For those familiar with her work, it may be somewhat bittersweet to see these iconic roles discussed. Filmmakers like K Bhagyaraj and P Bharathiraja, and actors like Rajinikanth and Kamal Haasan discuss their working relations with her, often showing the lighter side of the dedicated actress. 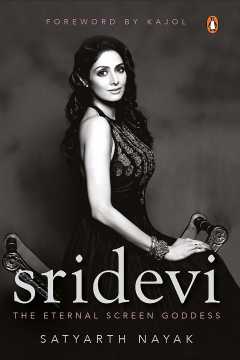 The book would have been incomplete without her many contemporaries and rivals, especially Jaya Prada and Madhuri Dixit, whom she was often pitted against in the press. Nayak also points out Sridevi’s thoughts about her process (like her habit of learning her lines) and direct approach to her acting career through artistes and journalists who knew her well at the time.

Sridevi: The Eternal Screen Goddess also captures the emotional graph of her life as the busiest star of Indian cinema, who became very lonely after the deaths of her father and mother. The book is almost like an academic homage to the actress, but shows off smaller unassuming moments of the star, thanks to those interviewed. Kajol provides the foreword, writing more as a fan than as a fellow movie star.

The book also discusses smaller but important aspects like the power of her stardom over that of many of her male co-stars, and her popularity in the LGBTQ community through the powerful, inspiring roles she played. There is little room for gossip in the book; it is addressed, of course, as much of Sridevi’s voice arrives from prior interviews given to the popular film magazines of the time.

Nayak’s book will likely introduce many to the star’s life and, of course, her films. His detailed analysis of her roles might just get many to revisit those films just to see Sridevi light up the screen once again.