Meghna wanted Chhapaak to be a positive story, told from a survivor’s point of view, says Paayal Kapoor Nair


Actress Paayal Kapoor Nair, who played 'Shiraz Aunty' in Chhapaak, speaks about her role in Meghna Gulzar’s film and discusses her journey in acting.

Paayal Kapoor Nair joined Meghna Gulzar’s Chhapaak (2020), starring Deepika Padukone, after a casting call in late 2018 by casting director Gautam Kishanchandani. She auditioned for the role of Shiraz Jamshedji, the generous Parsi employer of Malti’s father who becomes part of Malti's support system over the years.

From the audition and after she was cast, Kapoor Nair learnt more about Laxmi Agarwal, on whom the film was based, by reading and watching videos of the acid-attack survivor.

“The casting director had explained the role, but of course, it was a brief character sketch which was given at the audition. But when I got confirmed and had a meeting with Meghna ma’am, that’s where we did the reading of my scene and I had a couple of questions,” she said.

“[Malti] is from a lower-middle-class family. Her father works for Shiraz Jamshedji, [who] has been a human rights activist. She is already helping people in need and if it happens to somebody she knows so closely as Malti, obviously she takes [her] up as a responsibility,” the actress added.

Meghna Gulzar, the film's co-writer and director, was extremely clear about the kind of characterization and look she had in mind for 'Shiraz aunty' in the film. “Most of the research material came from Meghna ma’am, she showed [me that Shiraz] is acting as a bridge between Malti and the outside world and the legal battle, the lawyers and all,” she explained.

Filming for Chhapaak began last March in Delhi, while most of the court scenes were shot later in Mumbai. To play the part of a Parsi woman living in Delhi, Kapoor Nair also changed the colour of her hair.

“There is influence in the costume,” the actress said of the city. “[They are] very upper class, elegant salwar-kameezes. Also, the journey is almost eight years, from 2005 to 2012. Every character has aged in that aspect.”

Meghna with co-writer Atika Chohan set the tone for the film early on, and the cast and crew executed their vision as is. “A subject like this, if you don’t handle it with a lot of sensitivity, there is a very thin line,” Kapoor Nair said of the work of the cast. “It can [become] dramatized, which she [Meghna] never wanted. If you add too much of melodrama, people will not like it. It has to be done very matter-of-factly so that people can relate. So the performances were more understated, they were very natural. That was the brief given to us.”

The actress went to say that the makers could have chosen a darker angle to tell the story but deliberately kept it more positive. 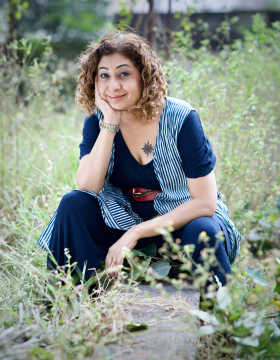 “You can make it very morbid, but I think both of them chose to tell this story from a survivor’s point of view. For her, living life to its fullest means something. She has her own period of being down, but the idea to tell a story is not how badly her life was affected, it is what happens after that,” she continued.

Malti’s story is a tale of triumph and courage, Kapoor Nair added. The film focuses on her journey to overcome the hand fate has dealt her. She also becomes a ray of hope for others like her.

The actress first arrived in Mumbai in 2000 and landed her first movie with Ram Gopal Verma’s Jungle. Originally from Delhi, Paayal Kapoor Nair was always interested in taking part in plays at school, and later got into professional theatre with Pierrot’s Troupe at college.

“[Pierrot’s Troupe is] run by my theatre guru Ashok Purang," she said. "We did a lot of workshops and prepared plays while I was doing my course. We also performed in Delhi at Shri Ram Centre and Kamani Auditorium.”

After that she moved on to anchoring shows on television and was a radio jockey. Recently she was seen in a cameo on the popular television show, Yeh Rishta Kya Kehlata Hai.

“Rajanji [Rajan Shahi], the producer, called me up and offered me a fiery lawyer who comes in and battles the child custody case between Naira and Kartik. It was very interesting, so I thought, why not?” she said.

When it comes to selecting projects, Kapoor Nair said, “The length doesn’t matter, but [what matters is] how much scope do I have in terms of performance in any show, because I have done cineplays also which is like a half-hour or 45-minute play, but in those I was playing a very important role.”

Kapoor Nair is auditioning now for other projects but she has also tried her hand at poetry and performed a piece recently in front of an audience.

“That is kind of my creative extension as an artiste,” she elaborated. “The piece that I wrote was about the perils of social media, that we are almost lost in that world, that we somewhere distance ourselves from reality. We don’t meet friends that often now. We are just on either WhatsApp or Facebook. It’s called Aaj Main Gumshuda Hoon, that I’m lost.

“Whatever comes, it’s not something I have to do it, but whenever I get some idea about it, I start jotting it down on paper and see how it shapes up. People have received it very well, and they could relate to it,” she said.