Released on 16 February 1990, the cult classic starring Amitabh Bachchan still leaves the viewer in awe. Though the 2012 version is well crafted, technically sound and watchable, it seems to diminish in its final impact as compared to the 1990 film.

It is 30 years to the date since the late Mukul S Anand’s Agneepath (1990) was released and bombed at the box office. Yet, today it is counted among Amitabh Bachchan’s best work. The then superstar of Hindi cinema went on to win the National award for Best Actor for Agneepath.

In 2012, the film was 'revisited' by producer Karan Johar, with Hrithik Roshan playing the iconic character of Vijay Deenanath Chauhan. It was a courageous move by Karan, whose father, the late producer Yash Johar, had produced the Bachchan-starrer and was apparently quite heartbroken by its dismal fate. 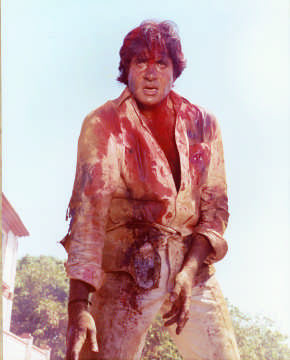 What worked for the 2012 film was that it was not a remake, a point the makers were quick to underscore, but was simply 'inspired' by the earlier movie. As an inspiration, the film, directed by Karan Malhotra, is well constructed and crafted. It is intense and engages one from the very beginning.

What Malhotra managed to pull off is a movie that bears only faint resemblance to Mukul Anand’s cult classic in terms of the narrative, its treatment, and the introduction of certain key characters like Rauf Lala and Kaali while doing away with Krishnan Iyer, MA, played by Mithun Chakraborty in the original. In typical Karan Johar style, the film is mounted on an epic scale, with the final conflict between Vijay and Kancha Cheena playing out almost like a David-and-Goliath encounter.

However, the emotional core of both movies is similar. Both have, as their starting point, the death of an upright, honest father, falsely accused of a heinous crime, and its impact on a son who craves vengeance above all.

Malhotra’s cast shines. Hrithik Roshan fleshes out the role of Vijay with his characteristic intensity and minimal flourishes. Rishi Kapoor as the villainous Rauf Lala is a delight, as is Priyanka Chopra as Kaali. Sanjay Dutt’s Kancha Cheena, played on a magnified scale by the actor, is a perfect foil to Hrithik’s Vijay.

Malhotra’s film stands on its own merit, is technically sound, and eminently watchable. However, it seems to diminish in its final impact when compared with Mukul Anand’s effort.

What sets both movies apart really is the stature of their leading men. Bachchan’s Vijay Deenanath Chauhan stands head and shoulders above Hrithik Roshan’s portrayal of the character. The anger, pain, grief, the burning desire for revenge, the yearning for acceptance from his mother, all of it pours forth from the superstar in an intense performance.

In fact, the gritty quality he adds to his voice seems to add an edge to his portrayal. The performance also has its flashes of flamboyance, especially during the dialogue baazi in the encounters with Danny Denzongpa’s version of Kancha Cheena.

The moral compass of many Bachchan films has been the mother. There was Nirupa Roy in Deewaar (1975) and Rohini Hattangady in Agneepath. Unfortunately, Zarina Wahab’s mother in Malhotra’s version is powerless. Hers remains an insipid presence mouthing clichéd dialogues.

Hattangady, on the other hand, rises to the occasion as ‘the’ mother, in the style of Mother India (1957), the embodiment of Indian motherhood. The relationship between the mother and the son adds an emotional dimension to the 1990 movie, absent in the later version.

While Anand’s version lacks the colour and style of Malhotra's film, the late filmmaker managed to achieve a balance of style, content and emotion. He did so with his use of muted colours and the brooding undercurrent of emotions which is palpable in every frame.

In the final analysis, Agneepath is about the moral struggle between good and bad. Lending weight to any struggle is the calibre of its protagonists. And Bachchan was the ultimate underdog taking on the might of the villain. Of course, the villain in this case was a cold-blooded killer (Denzongpa) lacking the menacing quality of Sanjay Dutt's Kancha.

But the final redemption of Vijay’s character, set to the refrain of Harivansh Rai Bachchan’s poem 'Agneepath', touched an emotional core which is hard to replicate. Mukul Anand’s Agneepath may have been made in a different time, but the power of the narrative raises it a notch above its inspired version. This one is definitely a cult classic.